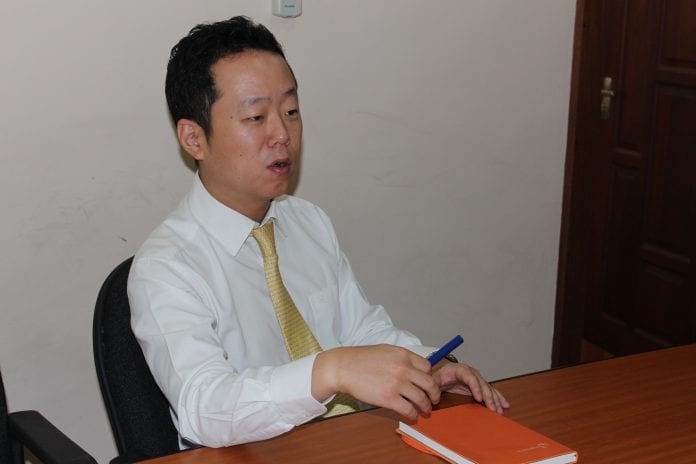 The South Korean conglomerate has already received approval from the Yangon City Development Committee (YCDC) for its first real estate project in the country’s commercial hub and awaits MIC’s (Myanmar Investment Commission) nod to go ahead.

The cost of the mixed use real estate development, to be called “Tritone,” is estimated at $150 million, Joo Han Kim, chief representative of Hanwha Corp’s Yangon representative office, told Myanmar Business Today in an exclusive interview.

The project will be located near the 8-mile junction in Yangon, comprising three towers – two 30-storey, the other 22. The first five floors will be allocated for shopping malls while the rest will be residential apartments. Hanwha aims to start construction in February 2015 and finish the development within three years.

“This project will have Myanmar’s first five-storey basement parking space. That was the key point during our discussions with YCDC,” Kim said.

Kim said Hanwha has expertise in constructing such developments, especially in South Korea where the land has similar features. Hanwha owns one of South Korea’s tallest skyscrapers “63 Building,” the name referring to the building’s 63 official storeys: at 819 feet high, it was the tallest building outside North America when it opened in July 1985, and remains the tallest gold-clad structure in the world.

Materials for the construction will be sourced partly from local suppliers with the rest imported from South Korea, China, Japan and Europe. Kim said the firm will “utilise Myanmar manpower” as much as it could, but engineers and architects will be coming from South Korea.

While many experts foretell a looming collapse of Myanmar’s spiralling property and real estate market drawing from the examples of busted property bubbles in Vietnam and Cambodia, Kim has different views.

“In Myanmar, most lands belong to the government, especially the military. In terms of private sector when they buy land they don’t borrow money. Because of high interest rate, they usually use their own money or their own land for projects.”

Kim was stationed in Vietnam during its property boom in 2005, and just like Yangon the prices went up, “doubled, tripled, it was crazy.” At that time prime office space in Vietnam was renting for $130 per square metre per month, while Yangon’s premium office space in Sakura Tower now costs over $85. Seven years later property prices in Vietnam crashed drastically, coming down to $35 per sqm.

“Myanmar is a little different than Vietnam. Myanmar government doesn’t allow foreigners to hold ownership of land unlike Vietnam. So, people borrow money, and when the market goes down they have to sell because they have to pay interest.”

He said in Myanmar most has to buy property with their own money, and when the market sags, they usually don’t seem to care.

“Property wise it will be an uptrend for the next 10 years, land wise it might go down a little bit or stay the same,” Kim predicted.

Kim was dispatched to Myanmar by Hanwha’s central headquarters in 2010 to find investment opportunities in the emerging market as well as to establish the firm’s trading business. The firm had a presence in Myanmar in 1996, but left in 1998 during the South Korean financial crisis.

Kim said Hanwha is currently exporting Myanmar rice overseas especially to the Middle East and Russia. The firm is now in talks with some major rice exporters in Myanmar, which has only about five to six big traders whoexport over 100,000 tonnes, to expand its business.

“Rice export is on the rise in Myanmar and it has just crossed 2 million tonnes. There are plenty of opportunities. We are also expanding into value-added manufacturing facilities for agricultural products especially rice.”

In the long term another of Kim’s assignment was to build Hanwha’s presence in Myanmar’s manufacturing sector. He said the company is discussing with some local partners to set up a ready-mix concrete manufacturing facility. The facility will supply concrete mainly to Hanwha’s own construction site as the firm remains sceptical about the quality of local ready-mix concrete.

Kim said the firm is not too late in starting up in construction sector in Myanmar. “Actual building going up still is limited. YCDC granted a number of projects last year, but many of them don’t know how to finance or manage the projects. They open office, start selling or leasing, but in terms of construction they are slow.”

After dealing with the central government, Yangon administration and Myanmar businesspeople for the last four years, Kim is also eyeing to set up a consulting services arm of Hanwha in Myanmar. “We have gathered a lot of experience on how to do business here. It’s all very difficult at the first time.

“We will provide consultancy services to foreign companies who wish to come into Myanmar and set up businesses in manufacturing and real estate. If we find a project interesting we might even become a partner.”

Kim identified the lack of electricity as the single biggest obstacle to doing business in Myanmar. “There are still not enough big private projects in Myanmar. Without electricity you can’t have that. Once electricity problem in Myanmar is solved then we’ll see the real boom.”

The Hanwha chief rep said when the he first came to Myanmar it was not easy to talk to the then-military government but now it is a “very different country,” and he doesn’t have “big complaints” against the government.

“Everything has eased up, so are their minds. People say government doesn’t listen. I’ve been here since 2010 and I’ve seen how this government has reformed. I think people should look back four years and stop complaining.”