Hedging between Giants: Myanmar, China and the United States 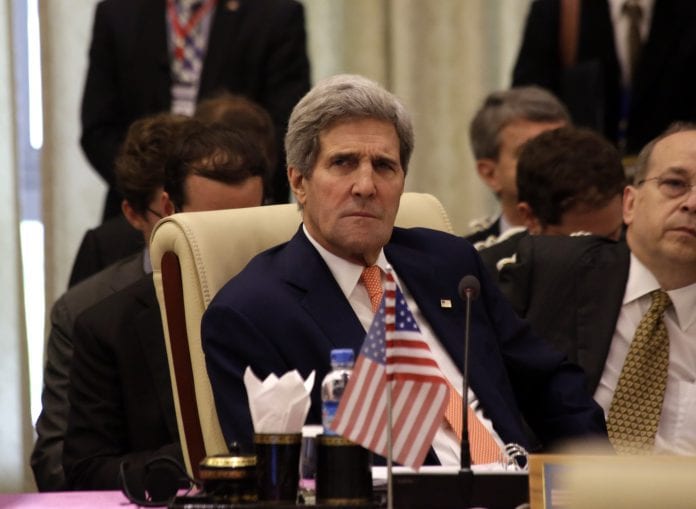 As Myanmar seeks to sustain its reform momentum, it faces a challenging balancing act between Chinese rebalancing and America’s pivot to Southeast Asia.

Recently, when US Secretary of State John Kerry arrived at the ASEAN Regional Forum in Nay Pyi Taw, he wanted the “people of Myanmar to know that they have the support and the friendship of the US.”

In reality, Kerry’s visit was overshadowed by the concerns of Capitol Hill and human rights watchdogs about “stalled political reforms,” and “rising violence against ethnic and religious minorities in Myanmar.”

Meanwhile, China’s Ambassador Yang Houlan said that “although there are some differing views on the relationship between China and Myanmar, it won’t impact ties between the two countries.”

In reality, the bilateral ties between China and Myanmar have been strained by Chinese setbacks in a few high-profile projects, which have led to unease among Chinese investors.

Inadvertently, Myanmar has become a testing ground between Chinese and US spheres of influence in Southeast Asia.

Since taking office, President Thein Sein has introduced a slate of reforms and significantly improved Myanmar’s ties with the United States and European countries.

From Washington to Brussels, Myanmar is seen as a fascinating story of economic growth and human rights.

In 2012/13, Myanmar’s economy grew at 6.5 percent. Fuelled by increased gas production, services, construction, foreign investment and strong commodity exports, the country is on track to grow 6.9 percent in the medium-term.

Amidst its rapid growth, Myanmar is struggling to improve its business environment with multiple parallel reforms underway. However, given high reliance on the abundant natural resources and low productivity in agriculture, the economy remains vulnerable to shocks and external risks.

These downside risks include a decline in commodity prices, but also potential slowdown in Chinese growth, adverse developments in Japan, slower recovery in the US, and further economic fragility in the Euro zone.

After decades of diplomatic isolation, economic and military sanctions, Washington relaxed curbs on foreign aid to Myanmar and the relations were normalized in 2011. The EU has followed in the footprints.

Today, both Washington and Tokyo are intensifying their respective investment drives in Myanmar. Japan agreed to cancel $2.7 billion in debt and pledged $900 million to support a new foreign assistance program.

While China was scheduled to upgrade a rail track from Yangon to Mandalay, Japan won the contract and is now also hoping to modernise Yangon’s crumbling urban transit system.

Meanwhile, US Congress has expressed concerns about Myanmar’s human rights record, intimidation of journalists and violence against the Rohingya Muslims. Washington would like to see more political reforms, democratic institutions, and improvement  of human rights.

From the Myanmar standpoint, the problem is that so far the US has proved less eager to actually invest in Myanmar, except for bold private-sector globalisers, such as Coca-Cola and some other businesses.

President Obama visited Myanmar in 2012, but the administration has not fully lifted sanctions. As a result, US investors have not walked the talk.

Despite obstacles, Chinese FDI in Myanmar remains high. By October 2013, some 60 percent of all realised foreign investment in the country was from China and Hong Kong. These capital flows were followed by those from Korea, Thailand and UK, not yet from the US.

In the first half of 2014, the cumulative investments of China and Hong Kong accounted for some 45 percent of total investments.

Not all major projects have been smooth, however. In two major FDI setbacks, local critics of Chinese capital have made reference to environmental issues and dislocations of local population, while the Myanmar government has tried to be responsive to citizen appeals, mindful of the impending elections.

In the end, pragmatism may still prevail because the termination of the Myitsone dam project could have more extensive legal, political and economic implications.

The second high-profile setback is the Kyaukphyu-Kunming rail project, which the Myanmar government put on the back burner in July, allowing the memorandum of understanding (MoU) to lapse.

Soon thereafter in early August, Thailand gave approval for two Chinese high-speed rail projects that call for rail links from Thailand to Kunming. The signal was that China, too, has other available options.

Nevertheless, China is also moving ahead with plans to create an 18-mile rail tunnel through the border mountains with Myanmar to serve as the entry point to Kunming. In Myanmar, almost 40 percent of the imports are from China because they benefit ordinary people.

So the cooperation option remains on the table. However, despite occasional public crumbling, both Washington and Beijing may understand that critical decisions are likely to follow only after political consolidation in 2014-15 – that is, after the elections.

In Washington, the dominant Myanmar narrative is geopolitical. The question is whether the country can serve the US-led alignment to contain China.

In Beijing, the Myanmar narrative builds more on economic realities. The question is whether the country will join the Chinese-led economic regional integration.

According to US observers, the Chinese rail project, which would pass through Myanmar’s northeast mountains to the coastal plains on the Indian Ocean, would give Beijing a shortcut to the Middle East and Europe. It would also serve as an alternative to the longer trip through the contested South China Sea.

In Beijing, the rail project is seen to belong to the grand Chinese effort to build thousands of miles of rail track to interconnect Laos, Cambodia, Thailand and Malaysia all the way down to Singapore. It is part of the extensive trans-Asian rail accord, which almost 20 Asian countries signed some eight years ago.

In Beijing, Myanmar is seen as an emerging economy led by President Thein Sein, which has opted for economic reforms and opening-up policies, as China did in the 1980s. In Washington, Myanmar is perceived as a nation, which has been inspired by the opposition leader Aug San Suu Kyi’s struggle for democracy and human rights.

Amidst these centrifugal perceptions and expectations, Myanmar’s policymakers are struggling to hedge their bets. They know only too well that a balancing act is one thing, but bandwagoning – or the perception of bandwagoning – is something very different.

The great balancing act for Myanmar is to reap the economic benefits from both Chinese and US foreign direct investment. At the end of the day, investor interest is fuelled by returns.

Myanmar needs to create a middle ground that is welcoming to all foreign capital and serves the interests of the Myanmar people and inclusive growth.

Dr Dan Steinbock is the research director of international business at the India, China and America Institute (USA) and a visiting fellow at the Shanghai Institutes for International Studies (China) and EU Center (Singapore). The views and opinions expressed in this article are the author’s own and don’t reflect Myanmar Business Today’s editorial opinion.