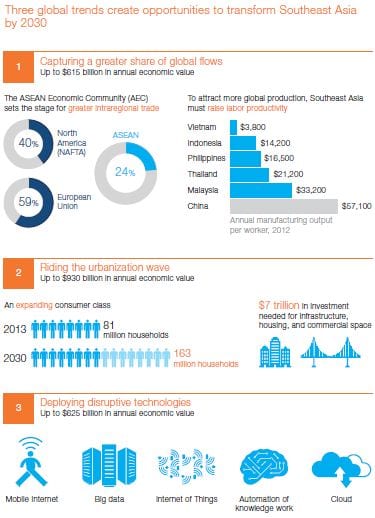 Southeast Asia has emerged as one of the world’s most dynamic growth markets, but it needs an intense new focus on productivity to sustain its momentum, according to a new report.

Viewed as a single entity, the region would rank as the seventh-largest economy in the world. With a combined GDP of more than $2.4 trillion, its economy was already more than 25 percent larger than India’s in 2013.

But much of its recent growth has been generated by an expanding labour force and the shift of workers from agriculture to manufacturing. The impact of the demographic dividend expanding the workforce, while still positive in most ASEAN countries, will start to diminish, says the latest report from the McKinsey Global Institute (MGI), Southeast Asia at the crossroads: Three paths for prosperity.

“Higher productivity will be particularly important if the region is to capture a greater share of global manufacturing,” said Oliver Tonby, managing partner at McKinsey & Company in Southeast Asia.

This creates new urgency for confronting the region’s low levels of productivity. To sustain economic growth, many member states will need to more than double their historic rates of productivity improvement, McKinsey said.

“Investors and multinationals are increasingly gravitating toward ASEAN as a market with an attractive production base and rapidly expanding consumer class. Add to that the availability of low-cost labor in Cambodia, Indonesia, Laos, Myanmar and Vietnam, and the region could have distinctive competitive advantage,” Tonby said.

Beyond its productivity imperative, Southeast Asia faces urgent priorities in addressing infrastructure, housing, and education, the report said. Existing gaps and shortfalls could constrain the region’s potential unless Southeast Asian countries identify the right set of catalysts to propel its growth in the decades ahead, it added.

While wages may be lower in Southeast Asia, the advantage of low labour costs in these countries is undermined by weak output per worker.

“Southeast Asia’s lower-income countries will have to grapple with their productivity challenges in order to be globally competitive – and, even more important, to continue raising the living standards of their workers in the future,” according to Dr Fraser Thompson, MGI Senior Fellow.

“The key to accelerating productivity and creating broad-based prosperity lies in three forces that are already shaping Southeast Asia: greater regional integration, urbanisation, and new technologies and innovation,” he said.

In the absence of an active strategy for capitalising on them, those countries are unlikely to lift the region to the next level of economic development, Thompson said.

“If policy makers and businesses in Southeast Asia prioritise the opportunities associated with these forces, the results could be transformative,” he added.

MGI said countries that are more connected within global networks experience faster GDP growth. ASEAN has key advantages for capitalising on this trend: it is already the fourth-largest exporting region in the world, and by 2025, more than half of the world’s consuming class will live within a five-hour flight of Myanmar.

The region can build on these strengths by fully implementing the ASEAN Economic Community (AEC) integration plan, McKinsey said. The AEC, which envisions freer movement of goods, services, capital, and people among member states, aims to create an open market of more than 600 million consumers.

“Intra-regional trade in ASEAN is currently less than half the share of intra-regional trade in the North America Free Trade Agreement (NAFTA) and the European Union (EU). There is enormous scope for the region to deepen trade ties among its members – and to build on those new efficiencies to increase trade with the rest of the world,” Tonby said.

According to an MGI business survey, more than half of respondents in the region believe that economic integration will boost their profits by more than 10 percent. At the same time, respondents cited restrictions on foreign investment and ownership as the most significant hurdles to trade in ASEAN, followed by varying standards and regulations and inefficient customs procedures.

The report finds that greater integration could improve cost competitiveness for companies by up to 20 percent in many sectors by creating regional economies of scale and improved inventory and logistics management.

The booming cities of Southeast Asia account for more than 65 percent of the region’s GDP today. More than 90 million additional people are expected to move to urban areas by 2030.

McKinsey said to tap into this growth, businesses will need a city-level view of the region. Many of ASEAN’s fastest-growing markets for certain consumer goods are smaller up-and- coming cities rather than the better-known mega-cities.

Keeping pace with urban growth will demand more than $7 trillion of investment in core infrastructure, housing, and commercial real estate across ASEAN through 2030 – an amount that is roughly double the current GDP of Germany, McKinsey said.

The firm’s research has found opportunities to reduce the cost of infrastructure by around 40 percent through better project selection, more efficient delivery, and strategies to maximise the life span and capacity of existing infrastructure.

Much of Southeast Asia, with the exception of Singapore, is starting from a relatively low base in terms of digital infrastructure, adoption and innovation. But the region is increasingly tech savvy – ASEAN has the second-largest community of Facebook users and the third-largest number of mobile phone users globally.

Five related technologies – the mobile Internet, big data, the “Internet of Things,” the automation of knowledge work, and cloud technology – could modernise sectors across the region’s economy and drive major productivity improvements.

Many of the region’s small enterprises have limited access to IT services today, but cloud technology can put secure storage services, basic software, and enterprise systems within their reach.

“Companies across ASEAN can do more to harness new technologies to boost productivity. There is clearly great potential for technology to change the playing field,” according to Tonby.

However, he said it hinges on whether ASEAN can build out the necessary telecom infrastructure and address workforce skills, while governments also need to address regulatory barriers to the rapid adoption of new technologies.

“By focusing on regional integration, urbanisation and technology as drivers of future growth, Southeast Asia could be poised to make a leap forward in economic development. In all three of these areas, long-term thinking and investment by the public and private sectors could create economic opportunities worth hundreds of billions of dollars and place the region on a faster and more sustainable trajectory through 2030.”