Huawei Celebrates First Ever Fans Meet Up in Myanmar 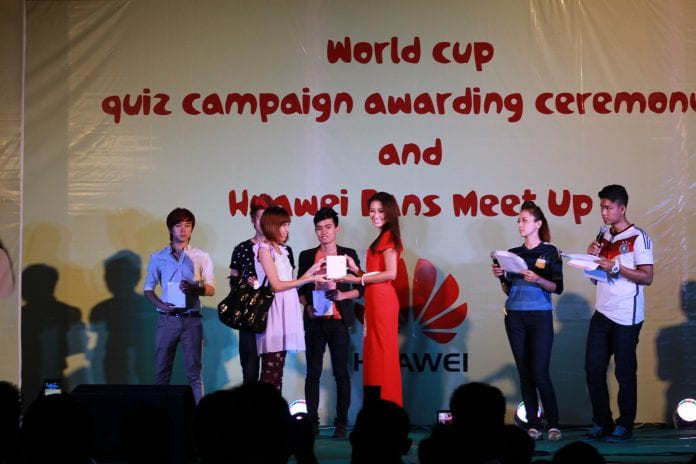 Over 1,000 fans across Yangon and some from Mandalay participated at the Huawei Fans Meetup alongside music performances, outdoor games and giveaways.

There were 65 winners for Huawei’s quiz contest that was participated by more than 70,000 fans on Huawei Device Myanmar facebook page and the awards were offered into four different categories.

Khin Yadanar Win, marketing manager of Terminal Department, said, “It’s been quite a journey for us to get all the Huawei Device fans connected online and connect with them through Facebook campaigns, hold a contest and finally meet up.

She said Huawei has seen a rise in facebook fans but to maintain and engage the fans is a big challenge and requires strategic planning. Many leading mobile devices companies have started digital engagement on Facebook using ads, holding contests online and give away prizes.

“We have acquired 170,000 fans within four months with a total of eight contests and campaigns since April. The most traffic we have pulled in is with two major events – Thinggyan Festival Contest and World Cup Quiz Contest – drawing more than 100,000 new fans,” Khin Yadanar Win said.

According to a recent report by ondevicesearch.com on Myanmar’s mobile market, Huawei is used by 71 percent of the users in the country. Myanmar is also almost exclusively an Android playground with 95 percent market share. Starting from a clean slate in 2011, lack of legacy handset and tumbling prices of Android handsets have created a unique situation where people go from having no phone straight to owning a smartphone.

“There are now about 10 active mobile device Facebook pages in Myanmar engaging and communicating with their consumers by holding two to three contests per month regularly. Some device pages run organically and others use paid Facebook Ads along with holding contests.

“Huawei’s page is a leading one among those pages in Myanmar with over 180,000 fans. We think connecting the online campaign with outdoor event would be great for them to draw in more fans,” said Erik Oo, chief operation officer of Blink Public Relations & Digital Media Agency.