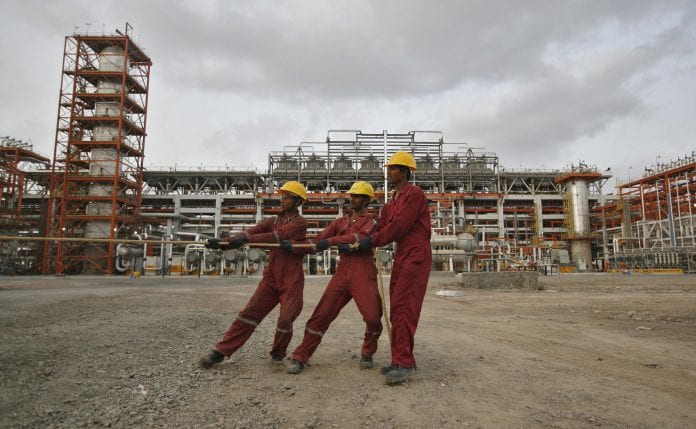 India’s state-run oil companies are feeling the pain of the finance minister’s determination to meet his fiscal deficit target, with officials warning that exploration is under threat and losses at oil firms could steepen.
Oil Minister M Veerappa Moily warned the finance minister, P Chidambaram, that the subsidy burden placed on upstream companies was making oil fields unviable.
His ministry also forecast that revenue losses further downstream at fuel retailers Indian Oil Corp, Bharat Petroleum and Hindustan Petroleum will rise to 803.16 billion rupees ($12.83 billion) in October-March, from 623.32 billion rupees ($9.96 billion) in April-September.
India budgeted fuel subsidies for the fiscal year to March 2014 at 650 billion rupees. The oil ministry said that is likely to be more like 1.4 trillion rupees.
The warning and figures were in oil ministry letters seen by Reuters. The oil and finance ministries declined to comment.
Chidambaram says the budget deficit target of 4.8 percent of GDP is a “red line” that will not be crossed as he tries to fend off a threatened downgrade of India’s sovereign credit rating to “junk.” The soaring fuel subsidy bill has put the target in jeopardy.
The finance and oil ministries want to raise the price of subsidised fuel, such as diesel, to reduce pressure on government spending.
But with state elections in coming weeks ahead of national elections that must be held by May, the chance of the coalition government agreeing to a significant price increase is slim.
Instead, the finance ministry is shifting much of the added cost of fuel subsidies onto the balance sheets of state oil exploration companies and oil retailers, such as Oil and Natural Gas Corporation (ONGC) and IOC.
“In the given political scenario, the government is unlikely to bite the bullet by hiking the diesel prices by 3-5 rupees per litre. So there is no option except to bear the subsidy burden,” a senior official at the oil ministry said.
Under the subsidy scheme, exploration companies sell crude and products to state refiners and retailers at a $56 per barrel discount to global prices.
It was “having a huge negative impact on the ability of ONGC and (Oil India Limited) to continue existing oil-and-gas discoveries,” Moily wrote in a letter to his counterpart. “The burden on the upstream oil companies therefore needs to be reduced,” he said.
ONGC, India’s leading upstream oil company, has warned in two letters to the government in recent weeks that the company was only earning $40 a barrel for its oil, barely covering the cost of production and leaving nothing for sorely-need exploration and investment.
It said global prices have come down but the discount had not been adjusted.
Left unchanged, the current discount would “increase India’s dependence on imported crude,” ONGC said in one of the letters.
ONGC Chairman Sudhir Vasudeva said his firm may have to start borrowing money if the subsidy burden is not lifted.
“Most of our projects are not viable at $55 a barrel and in the first half our realisation will definitely be less than $55 a barrel,” Vasudeva told Reuters.
Asia’s third-largest economy meets nearly 80 percent of its oil needs through imports – this year hit hard by a 22 percent depreciation of the rupee against dollar between May and August when the currency fell to a record low.
Preliminary calculations show that the finance ministry could defer subsidy payments to oil firms of 300-400 billion rupees ($6.39 billion) until the next fiscal year, a senior finance ministry source with knowledge of the numbers said. There was a similar rollover into this year’s budget from 2012-13.
In addition, the ministry may have to finance an extra 250-300 billion rupees of subsidy to fuel retailers in this fiscal year from spending cuts, the source said.
The subsidy pressure is unlikely to cheer investors contemplating the government’s budget plan to sell a 10 percent stake in IOC.                   Reuters