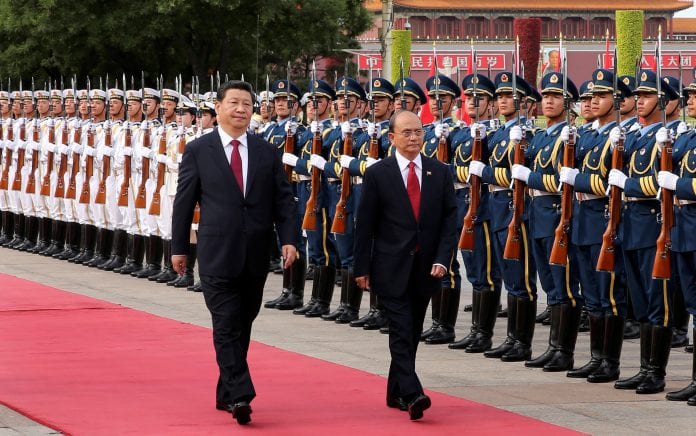 Indian External Affairs Minister Sushma Swaraj will conclude a series of diplomatic missions throughout Asia with a visit to the Asean Foreign Ministers’ Meeting in Myanmar in August. Her visit will set the stage for Prime Minister Narendra Modi’s upcoming visit to Myanmar in November. These visits come as public and governmental opposition to Chinese infrastructure projects in Myanmar rises, offering India the opportunity to fill the strategic gap left by China’s waning influence.

While China remains Myanmar’s largest trade partner and supplies the bulk of the Myanmar Armed Forces’ weapons, the Myanmar government seems to be losing interest in Chinese infrastructure investments.

On July 18, Myanmar’s Ministry of Rail Transportation announced the cancellation of an agreement with the Chinese government to build a railway connecting Kunming in China to Kyaukpyu in Rakhine state. Ministry director MyintWai attributed the cancellation to public opposition.

Yang’s claims have not been corroborated by the Myanmar government.

The 1,215-km Kunming-Kyaukphyu railway, proposed in a 2011 MoU between the Chinese and Myanmar governments, would have followed the route of an existing pipeline that connects gas fields in the Andaman Sea to refineries near Kunming. The $1 billion pipeline was fully funded by the Chinese government.

A recent Reuters report said the pipeline has been delivering only 15 percent of its intended annual capacity to its destination in Kunming.

Similarly, the bulk of the $20 billion cost of the now-defunct railway project was to be borne by the China Railway Engineering Corporation (CREC).

However, in the three years since the MoU was signed, public opposition to the project has hampered all progress on construction. Political parties and civil society groups in Rakhine state, through which the railway would have passed, have protested the construction of the pipeline as well as the railway, citing environmental and social concerns. Groups in Rakhine state also oppose the practice of exporting local natural resources out of Rakhine territory.

The cancellation of the Kunming-Kyaukpyu railway project follows a growing trend of opposition to Chinese investment in Myanmar’s infrastructure. In 2011, public opposition to the multi-billion dollar Myitsone hydroelectric dam, another Chinese project, prompted President Thein Sein to suspend the project indefinitely.

Wasbir Hussain, director of the Centre for Development and Peace Studies in Guwahati, describes China’s engagement with Myanmar as the pursuit of a three objectives. First, China seeks to use Myanmar’s natural resources to meet its domestic demand. Second, China wants to expand its access to the Bay of Bengal and the Andaman Sea in order to develop a modern maritime reconnaissance system. Third, China is bent on denying India strategic space across South Asia.

The cancellation of the Kunming-Kyaukpyu railway project and the lackluster performance of the China-Myanmar gas pipeline endanger all of Beijing’s objectives.

At the same time, New Delhi seems to be achieving its strategic goals in Myanmar with increasing ease, allowing India to fill many of the remaining gaps in its Look East Policy.

While Chinese projects Myanmar are consistently falling prey to public disapproval, several infrastructure projects that will connect Myanmar to India’s northeast states appear to be making progress, even in the face of similar local opposition.

Kaladan Multi-Modal Transit Transport Project, which will connect India’s Mizoram State to a deep-sea port in Sittwe, is projected to be completed by 2015. The project will expand the capacity of the Sittwe port facility, giving India’s northeast states access to a harbour in the Bay of Bengal and connecting Myanmar to Kolkata port.

Groups such as the Kaladan Movement in Rakhine state and the Chin Human Rights Organization have raised concern about the Kaladan project due to the lack of environmental impact assessments throughout the planning process and the absence of any effort by either the Indian or Myanmar governments to consult with populations living along the route of the project.

Nonetheless, this opposition seems to have little impact on the progress of the project.

Earlier in July, the governments of India and Myanmar also pledged to proceed with the creation of a highway bus route that will connect Moreh in India’s Manipur state to Mandalay, which is set to be completed in October.

According to Madhurjya Kamar Dutta, program manager for trade and investment facilitation at the Mekong Institute for Development and Cooperation, India-funded infrastructure projects will facilitate the emergence of a new Mekong-India economic zone. The Moreh-Mandalay highway will fill a crucial gap in the Asian Highway network as well as connect India’s northeastern states to the East-West Economic Corridor, which connects Mawlamyine in Myanmar to Da Nang port in Vietnam. Thus, India will achieve a level of connectivity throughout Southeast Asia similar to what China has enjoyed for centuries.

Both Indian and Chinese infrastructure projects in Myanmar have faced public opposition, but only China’s plans have unravelled as a result, while India’s projects have remained intact. It is possible the Myanmar government has found a new patron in Asia. But it is more likely that these events follow Myanmar’s well-known practice of balancing the great powers against each other. By challenging China’s monopoly, the Myanmar government is opening strategic space to create further competition between India and China, affording Myanmar more leverage and autonomy in the international arena.