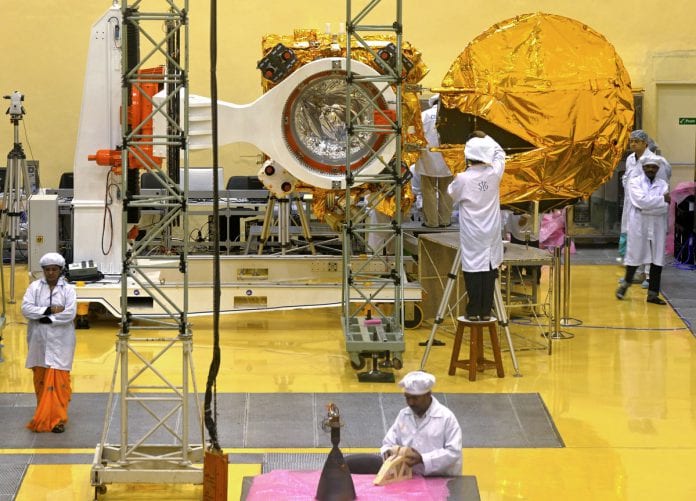 India’s foreign policy has a unique frontier to cross for reaching optimum relations with South Asia – space diplomacy via launch capability. This foreign policy tool is significant, as the 21st century will require increased reliance on space technology to keep up with the demands of globalisation. In the present era, space capability is also a coveted symbol of a state’s national power and prestige. South Asian countries have a dependable big brother in India for propelling themselves into the space niche.

India’s South Asian neighbours can gauge Indian Space Research Organisation’s (ISRO) cutting edge competency by the Mars Orbiter Mission. Another benchmark is the significant number of developed countries for which India has carried out satellite launches successfully. A total of 35 such missions have been launched by India for customers spanning from North America and Europe to North East Asia. ISRO’s latest collaboration has allowed UK to propel STRaND-1, the world’s first smartphone-operated satellite in space. Other missions that stand out include Israel’s TecSAR satellite and Singapore’s X-SAT. These two launches define how India’s technical ties can contribute to positive bilateral relations worldwide – TecSAR allows Israel to cooperate with Azerbaijan by maintaining peace and security in the latter’s mountainous terrain. There are unconfirmed reports that TecSAR was Israel’s surveillance tool to monitor Iran’s alleged nuclear weapons programme at the time of launch. This development has further added to the strength of India-Israel strategic relations, especially in the space domain. In the Asia-Pacific zone, the X-SAT microsatellite mission demonstrates Singapore’s desire to maintain India as a key balancing player in the region.

The observed dynamics demonstrate that South Asian countries also stand to gain strategically by establishing joint ventures in space technology with India. In the ongoing space age, there are many factors that require space capability for developing countries. These aspects are no less important than the needs of the developed world. They include environment studies, earth observation, remote sensing and meteorology. While geopolitics cloud over probable co-operation between ISRO and South Asian countries, their requirements in the space domain remains a potential binding factor. Tackling cross border issues like terrorism is a shared concern in the South Asian region. This can be approached on the lines of Israel’s TecSAR satellite. India can perform joint ventures to replicate this model and tackle shared border security concerns with Bangladesh, Afghanistan, Myanmar and Nepal. Other potential areas of interest are urban planning and fisheries to environmental impact assessment and water management.

There are several advantages offered by India as space launch hub. The proximity to Sriharikota allows for easier access to launch. This helps for takeoff with lesser requirement of fuel. The Geosynchronous Satellite Launch Vehicle (GSLV) allows missions for geostationary launches. The GSLV’s significance lies in the fact that the future of the global satellite market lies in the field of communications which is an important domain for the developing South Asian states. Smaller corporates are now shrinking the size of communication and broadcasting satellites, ranging from 100-300 kg, thus making ISRO an ideal candidate.

India’s neighbours can also gain from the low cost of ISRO’s launch operations which are 30-35 percent cheaper than other countries. The Geosynchronous Satellite Launch Vehicle – Mark III (GSLV-Mk III), which can put a four-tonne satellite in orbit, will help Antrix Corp, ISRO’s commercial arm, to offer the cheapest possible space launches in the niche market. The organisation charges approximately $50 million to $900 million for some of its commercial services. In comparison, the US and European launch price range is reportedly from $10,000-$20,000 per kg of satellite weight depending on the distance to the orbit.

The numerous emerging opportunities in the developing world can increase India’s small share of the global space market. According to a report by the Space Foundation released in 2006, the “space economy” is estimated to be worth about $180 billion, with more than 60 percent of space-related economic activity coming from commercial goods and services. India and its European launch partner, Arianespace, can together work for increasing India’s presence in the South Asia launch market. New Delhi can offer to build space infrastructure for its neighbouring countries in the region, thus catapulting technical aid.

However, India must first tackle the emerging geopolitical trend of Beijing being the preferred partner in the South Asian space market. China is helping build a space academy and satellite ground station in Sri Lanka. A Sri Lankan firm has struck a deal with Chinese state-owned companies to launch the island nation’s maiden telecom satellite in 2015, and Maldives and Bangladesh are both in talks with China for building or launching satellites for them. It is more practical for India to view the observed pattern as a catalyst for change to boost its space diplomacy. ISRO must lobby for MoUs on training, technology transfer and research and development. Technical cooperation by itself is not sufficient. Investment and aid are required to cement the space bridge with South Asia. There is an indirect route that may be applied – India can initiate space deals with developing Southeast Asian states such as Vietnam and Thailand. It will create a model of cooperative spirit that South Asian nations may seek to emulate.

China’s growing stronghold in space diplomacy can also be perceived as an opportunity, not a challenge. India can collaborate with China for joint missions – Nepal’s idea of leasing its first satellite to both China and India is ideal template for regional partnership. The BCIM (Bangladesh, China, India and Myanmar) Forum can be a potential platform to promote co-operative space ties over a common market.

On the other hand, India must begin to proactively market its Indian Regional Navigational Satellite System (IRNSS) navigation software across the subcontinent. Linkage via the Indian Remote Sensing Satellites (IRSS) also offers bright prospects. Of the total global remote sensing data market of about $50 million, ISRO is looking to capture 25 percent. India can also magnetize the smaller states in its neighbourhood by lobbying with Western states to invite them to join the International Space Station partnership. However, this positive pathway may run out of time, as the ISS will be defunct in 2020. China will certainly try to market its space station, being launched in the same year, to developing countries. Perhaps India can tie-up with its willing neighbours and the other existing space elite states to develop and operate a new international space station.

The inference drawn for India is that India’s competition with China for the lucrative space services markets must also be infused with a healthy attitude of cooperation. Enhanced space diplomacy by India with its South Asian neighbours can bring the scientific communities in the region together for developing cutting edge technologies. This display of friendship will positively influence South Asian states’ perception of India by building trust through co-operative ties. Rather than waiting for India’s challenged regional diplomacy to get resolved, the bridge of space alliances can spill over into better bilateral or multilateral relations. The result will be one small step for India, and one giant leap for South Asia.

Asma Masood is a freelance researcher on international relations in the Asia Pacific. The article was first published in Science, Technology and Security Forum (STSf) website and has been republished here with the author’s permission. The views and opinions expressed here are the author’s own and don’t reflect Myanmar Business Today’s editorial opinion.