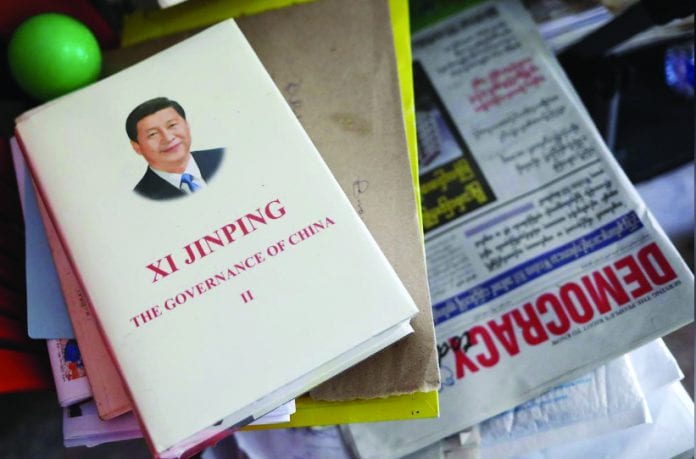 The 33 agreements signed by Xi and State Counselor Aung San Suu Kyi include a concession agreement and shareholders’ agreement on a deep-water port in Kyaukphyu Special Economic Zone, one of the projects the Chinese president has called the “three pillars” of China-Myanmar Economic Corridor. The other two are China-Myanmar Border Economic Cooperation Zone (CMEC) and the New Yangon City.

China has long relied on the Strait of Malacca, a vital trade route and major oil choke point, for the bulk of its oil and gas shipments. Linking the Indian and Pacific Oceans, the strait serves as the shortest sea route between the Middle East and Asia. But it is narrow as well as strategically vulnerable, forcing China to seek alternative routes in order to ensure its energy supply.

The $2.7 billion Kyaukphyu SEZ, located in the conflict-riven Rakhine State, covers a deep-water port along the Bay of Bengal, offering China a bypass route from the southern province of Yunnan to the Indian Ocean.

As part of Beijing’s Belt and Road Initiative, the two countries signed a memorandum of understanding in 2018 on the China-Myanmar Economic Corridor. The CMEC stretches from China’s landlocked Yunnan province to Mandalay in central Myanmar, further connecting to Yangon in the south and Kyaukphyu SEZ in the western Rakhine State.

The corridor, consisting of highways, railways, an economic zone and other infrastructure projects, is embroiled in the ongoing conflicts between the government and ethnic armed groups in northern and western Myanmar. Heightening environmental concerns over China’s infrastructure projects also triggered oppositions from locals, and as a result, the $3.6 billion Myitsone Dam project has sat in limbo since 2011.

In an article published by the China Dialogue, an independent environment news agency based in Beijing and London, Nicholas Lo, a US-based forestry and environmental researcher, criticized the Chinese BRI investment in northern Myanmar.

Lo cited as an example the plantation problems in Kachin state. While Myanmar timber has entered the Chinese market illegally, Chinese-run banana plantations in Kachin State have increased from 2,500 hectares in 2007 to over 40,500 hectares in 2018, according to civil society and government reports. Use of insecticides on the plantations has caused pollution of water supplies, damaged soil and killed fish and livestock.

“A green BRI will need more than economic investment alone,” Lo said. “Given the de facto absence of functioning regulation or any guarantees for local communities’ livelihoods in northern Myanmar, Chinese investment capital thus far has facilitated the degradation of the border region’s ecologically and culturally diverse landscapes.”

The researcher urged, “A broader and more inclusive coalition of stakeholders, particularly grassroots civil society groups that are most attuned to the needs of local communities, must be involved in development planning and decision-making processes for Myanmar’s border regions.”

New Yangon City, an urban development project proposing to build a new industrial area in Myanmar’s largest city, is envisioned to be a “productive” and “liveable” city with “world-class infrastructure”.

Despite the proposal and endorsement from the Chinese state-owned construction firm China Communications Construction Company (CCCC), a government official familiar with the accord told the Financial Times that some of the “key bidding, financing and other details” have not been finalized.

As no new projects were signed during the visit, observers said Myanmar is cautious of projects with China.

“I strongly believe that Myanmar is now very conscious in developing projects with China. The previous governments were criticized by many for projects like the Myitsone Dam for being too easy in contracting the projects to China,” said Sai Khaing Myo Tun, an associate professor of international relations at Yangon University of Foreign Language.

“People want win-win projects and those that will not have negative impacts on the environment,” he added.