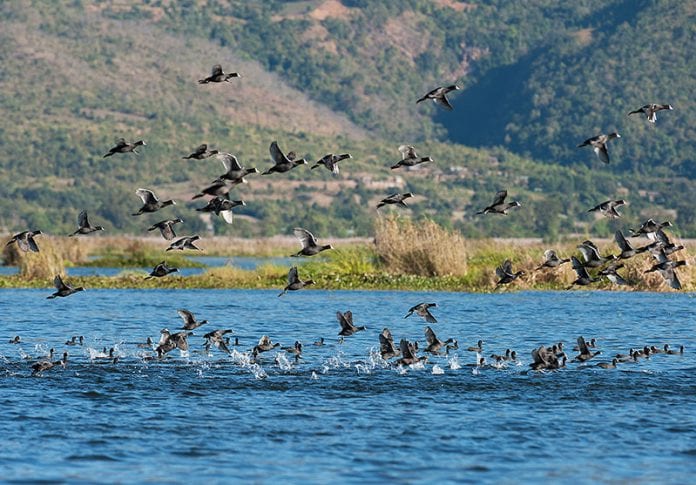 One of Myanmar’s greatest tourism draws, Inlay Lake, has been inscribed as the first Biosphere Reserve of Myanmar at the 27th Session of the Man and the Biosphere (MAB) International Coordinating Council (ICC) meetings at the UNESCO Headquarters in Paris earlier this month.

Inlay Lake has now joined the World Network of Biosphere Reserves (WNBR) under the UNESCO MAB Programme, established in 1971 to safeguard natural and managed ecosystems, and promote innovative approaches to economic development that are socially and culturally appropriate, and environmentally sustainable.

The WNBR, counting over 631 biosphere reserves in 119 countries all over the world, is one of the main international tools to develop and implement sustainable development approaches in a wide variety of contexts. It includes a wide range of locations such as Cambodia’s lake Tonle Sap, the Mare aux Hippopotames in Burkina Faso, the wetlands of Pantanal in Brazil and the Canary Island of Fuerteventura (Spain).

The Inlay Lake biosphere reserve is situated in Taunggyi District, Southern Shan state in Myanmar and covers a total area of 489,721 hectares. The wetland ecosystem of this freshwater lake is home to 267 species of birds, out of which 82 are wetland birds, 43 species of freshwater fishes, otters and turtles.

Diverse flora and fauna species are recorded and the lake is reported to be the nesting place for the globally endangered Sarus crane (Grus antigone). In addition to its ecological importance, Inlay Lake is also unique for the way the local inhabitants have adapted their lifestyle to their environment. Farmers from one of the dominant ethnic groups in the region, the Inthas, practice floating island agriculture, locally called ‘Yechan”. Inlay Lake and its watershed provides several ecosystem services on which local people depend, including clean air, clean water, a cooler climate, fish stocks and other resources.

UNESCO has been providing technical support to the Myanmar government, working the Ministry of Environmental Conservation and Forestry (MoECAF) Myanmar and UNDP, with support from Norway, to designate Inlay lake region as the first biosphere reserve of Myanmar.

The nomination of Inlay Lake region has received wide support and endorsement from the Union Government, Shan State Government, local communities at Inlay Lake, non-governmental organisations, University representatives, Youth groups, and the private sector who have all contributed to the nomination efforts.

As Biosphere Reserves are experimental sites which aim to reconcile biodiversity and sustainable resource utilisation, UNESCO said the designation of Inlay Lake region as the first Biosphere Reserve of Myanmar will further encourage and enhance environmental conservation initiatives to safeguard biodiversity and ensure sustainable livelihoods development in the region.

Facebook
Twitter
Pinterest
WhatsApp
Previous articleCentral Bank Bites Down on Dollar Use, But Does it Have Teeth?
Next articleThilawa SEZ to Rope in More Japanese Investors