Inle Lake: The Predictable and The Unknown 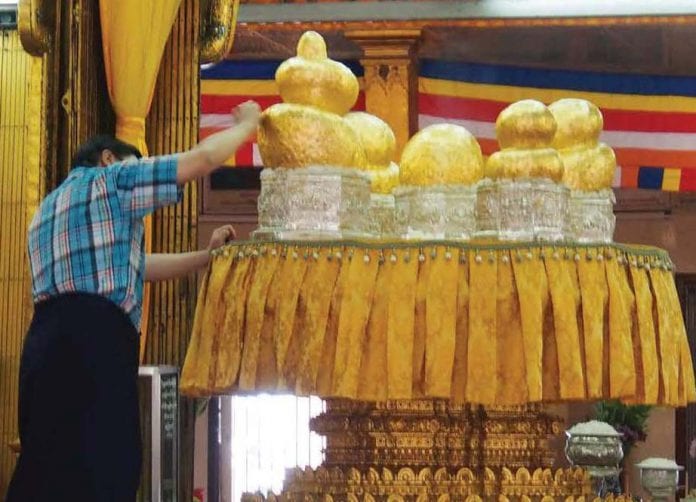 To one such as me, from a place such as Australia, any body of water bigger than the local swimming pool requires as much attention as I can muster. Lakes, rivers, streams – all remind me of something distinctly lacking in the Australian experience of “bit-wet-things”. While it’s true to say that Australia is one of the driest places in the world, it’s also fair to say that parts of the country do not qualify for that title, particularly at certain parts of the year. But not the great south of the great southern land, the place where there are rules specifying what day of the week, and at what time, you were allowed to water your garden.

So it’s no surprise to me that Inle Lake and the land around it are simply staggering for the sense of breadth, depth and verticality of it all. It’s big, it’s really big and it’s really wet. The very size of the place is enough to drive a man to drink.

Unlike Bagan, Inle’s “place to be” is confined almost solely to Nyuang Shwe, although there are a couple of other places one could go.

Sitting at one end of the lake, between each side of the mountains at the end of a canal, Nyaung Shwe, once outside of the tourist main drags seems much more like a sleepy fishing freight town than it does the backpacker go-to point for anyone looking to check out the lake.

If you go to Inle Lake you’re going to see the lake; that much is certain. It’s more a question of what to do, when, where and how. The simple questions of life.

Guest houses, hotels – high and low end – and resorts are all available to the discerning traveller. However, I might suggest that if you go for staying at a hotel on the lake you lock yourself out of the experience  of being near a lake but not on a lake and therefore able to go places and do things.

Nyaung Shwe’s full of interesting surprises, not all of which are for the tourist in you; like the roller rink frequented by some of the locals with bright lights and spinning wheels. A boat trip on the lake involves the predictable, the unpredictable and the wholly unknown.

Not that you have to buy anything, you could do as we did, sit and drink tea and watch the locals play a game of carrom – something which I’d never seen before but bears a remarkable resemblance to billiards.

They take you to the predictable places like the Jumping Cat Monastery; only thing about this place is the startling lack of cats, jumping or otherwise. Rather, they seemed to be sitting, sleeping or in a general state of doing not much, not now.

Then there’s the rotating market, round and round it goes, between the towns or on the lake, you can ignore the people selling the trinkets and concentrate on stooping over as you tower above everyone doing their morning shopping. There are interesting things, but most of it’s the same old – unless you’re doing your weekly shop there’s not so much a need for buying.

However, In Dein, a rather unknown and unheard of spot, was the highlight of the trip. This one takes a bit of wrangling as most of the boat guys won’t want to take you because “it’s hard.” Maybe they’ll try and charge extra for it but so long as your wrangling of prices is good, and you’ve already got them down in price, an extra K1000 is worth the expense. It’s only $1 after all.

They take you up one of the canals (there are two), up a series of what might be described as levies or weirs built from what seemed to be sandbags and bamboo, defying modern expectations of what’ll keep the water in check.

Between each weir – and for the purposes of this let’s call them that – a small V-shaped gate narrow enough for one boat at a time, and only the thin V-shaped things they drive on the lake. Gun the engine and go, up, over and down. Ready for the next one. Take the twisting bends of the canal and eventually you’re in In Dein. Not that there are any signs, eventually you just come to the dock conveniently placed next to some stalls selling more of the same.

Cross another canal on a bridge, walk through town, past the market and over another bridge. There you’ll start seeing the signs of In Dein’s drawcard, the hundreds of stupas that sit quite passively everywhere in and outside of town. Some just seem to be in the backyard of houses, while others sit quite forgotten on hills and outcroppings out the back of town.

If you’re game enough to walk the walk under the roof that covers your path up the hill you can find yourself at the Shwe Indein Pagoda, something akin to the heart of the stupa building space that is the town.

From there you can have some stunning views down the hill, of the generations upon generations of tumbledown brick spires slowly sliding towards the lake; while on the other side you’ll get a stunning view of the hills and mountains out of the back of town.

If you were to take just a little bit more of a walk, once you’re at the bottom of the hill you can find a set of something that might qualify as stairs, so long as you’re not judging by a strict criteria. At the top of those stairs, on something akin to a column of earth you’ll find stupa, one young and the rest very old and an incredible view of the Shwe Indein and the rest of the town around you.