Inside: Banking Reform in Myanmar 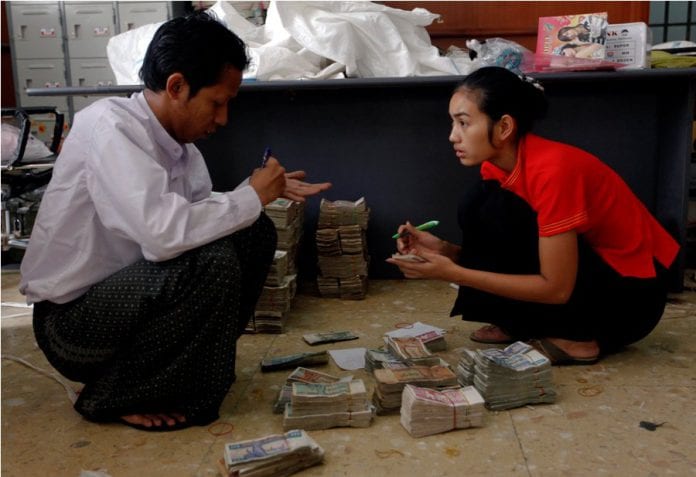 Myanmar’s banking sector, long one of the weakest links in the former pariah state, is expected to have one of the highest growth rates in Asia after it allows foreign banks to begin operations in early 2014. The country is experiencing explosive growth – 6.9 percent in the medium term, and rising, according to the World Bank – compared to its neighbours (5.2 percent, and falling), with rising household incomes, and foreign direct investment growth of 50 percent year-over-year. Moreover, Myanmar reports a substantial rise in volume and price of exports, both in commodities and manufactured goods such as gas, rice and garments.

In marked contrast, Myanmar’s internal banking services have had an extremely low penetration in this country of over 60 million. This means there is tremendous growth potential that is just beginning to be realised. According to the World Bank, domestic lending has again risen in excess of 50 percent in the past year, down slightly from over 60 percent the year before. The current government has undertaken a number of reforms designed to unify exchange rates and stabilise the currency. The World Bank has stated that the setting up of a Kyat managed float exchange rate system in 2012, the creation of a relatively independent Central Bank, as well as “licensing of new banks, expansion of branch networks, the broadening of eligible collateral to include key agricultural export goods, and doubling of the loan ceiling to farmers,” are likely to have a pronounced impact on the Myanmar population’s access to capital and banking services.

A year ago, Myanmar did not have one ATM, and no point-of-sales accepted credit or debit cards. Today, over 2,500 credit and debit-card terminals have been installed, as well as over 500 ATMs, some of which accept foreign-issued MasterCard or VISA cards. JCB, the Japanese credit card, has started to be accepted at over 2,000 terminals of the Myanmar Payment Union, which is the Myanmar national payment clearinghouse established by the Myanmar Central Bank and 18 banks. Credit and debit cards have started to be routinely issued, yet fewer than 10 percent of Myanmar’s people have a bank account and less than half of those actively use consumer banking services.

Furthermore, although Myanmar has four state-owned banks and nineteen privately-held banks, no foreign banks have been allowed to operate in the country except to open representative offices. Some 34 foreign banks have taken advantage of this exception, although none from the US. The Myanmar Central Bank is now working on a plan to license, in 2014, a select number of foreign banks to engage in limited operations in the country. The draft of the new banking law is expected to be released during the first quarter of 2014.

Will the US banks adapt to this new marketplace?

The US sanctions against Myanmar are administered by the US Treasury Department’s Office of Foreign Assets Control (OFAC). On July 11, 2012, OFAC issued Burma General License 16 (GL16), which specifically permitted the exportation and re-exportation of financial services to Burma, and Burma General License 17, which permitted investment in Burma. OFAC followed GL 16 with GL 19, issued on February 2, 2013, which also permitted financial transactions with four Myanmar banks currently listed on the Specially Designated Nationals list (two state-owned banks, and two private banks). In other words, to quote OFAC, “US financial institutions may enter into direct correspondent relationships with any non-blocked Burmese bank, and, as a result of GL 19, also with the following four blocked Burmese banks: Asia Green Development Bank, Ayeyarwady Bank, Myanma Economic Bank, and Myanma Investment and Commercial Bank.”

Despite this regulatory openness, it appears that many US banks’ respective compliance departments have not yet read, or understood, the OFAC rules and interpretative guidance. The USA Patriot Act Section 311 (anti-money laundering section) no longer applies to correspondence accounts’ transactions with Myanmar non SDN-listed banks, as well as with the four banks listed in GL19, provided that the underlying transactions are in compliance with the Burmese sanctions regulations.

As a result, US investors in Myanmar are well advised to check, before they make any efforts to invest in Myanmar, whether their current bank will support transactions with this country. Our firsthand experience is that some large banks, which routinely handle foreign transactions, can block or substantially delay sending even routine capital contributions to Myanmar, which is particularly incomprehensible when the proposed transaction is between an American parent and its wholly-owned subsidiary registered in Myanmar. These types of unwarranted denials or delays of bonafide transactions occur unannounced, without an explanation, and can have the effect of discouraging US companies and their controlled subsidiaries from investing in Myanmar. Surely this is not what the US regulators had in mind when they provided for specific banking licences.

The US Treasury Department, and in particular the US Comptroller of the Currency, which, among its mandates, ensures fair and equal access to financial services to all Americans, needs to address this rather urgent issue head-on. The current position of the Department appears to be that the marketplace will take care of itself. In the long run, this is a correct proposition. In the short run, though, Myanmar, in its new incarnation and with a more flexible regulatory framework, cannot continue to be treated as a rogue state. In fact, the Treasury Department should clarify and expand its policies, providing that US banks may undertake transactions with Myanmar under the same terms and conditions as those with surrounding countries.

Myanmar is changing for the better, at a fast clip, and the US banks need to recognise these positive changes. The US Treasury Department needs to actively continue assisting US businesses be competitive in a marketplace which has virtually unlimited potential at this time.

Dr Andrew Lian, who is leading the Herzfeld Rubin Meyer & Rose’s Government Affairs Practice, is one of Presidents Thein Sein’s advisers on ethnic conflict and business development. He is a member of a number of Presidential Commissions, and advises the Myanmar government on issues concerning minorities, as well legislative changes in the country’s investment laws.

The article was originally published on InsideCounsel.com and has been republished with the authors’ and publication’s permission.