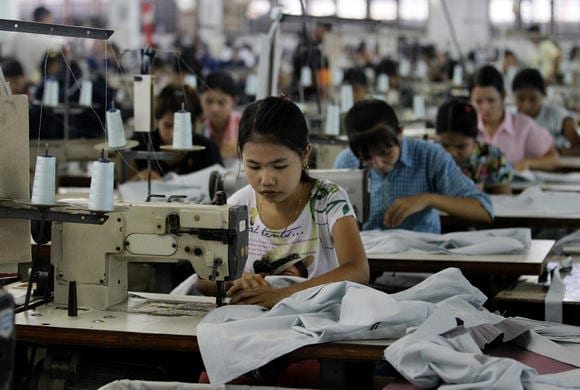 In order to expand the garment industry, international agencies such as Switch-Asia and the International Labour Organisation (ILO) have begun providing assistance in the form of training and channelling foreign investors to local businesses.

Simone Lehmann, project director of Switch-Asia, said, “We will definitely follow the local and international principles of labour such as avoiding child labour and having excessive working hours.

“Now Myanmar factories have started improving their social standards. The export value of 2014 was $1.5 billion.”

He also added that there are currently 200,000 labourers in the industry and 93 percent are young females. They receive around $110-120 on average, including bonuses, he said.

The ILO’s chief technological consultant, Michal Strahilevitz-Ben Eliezer said Myanmar has a good potential to grow its garment business in the future and it is estimated that the number of labourers in the industry will increase to around 5.5 million.

“ILO studied on the garment business outside Yangon and realised that Mandalay cloth-making businesses received no international assistance. Myanmar can compete in both foreign and domestic markets, but responsibilities should be taken seriously.”

Switch-Asia Programme, funded by the EU, has been carrying out projects for sustainable consumption and production of goods for developing countries in Asia since 2007. It is currently implementing long-term projects with financial aid of over €300 million in countries such as Indonesia, the Philippines, Thailand, Malaysia and Sri Lanka.