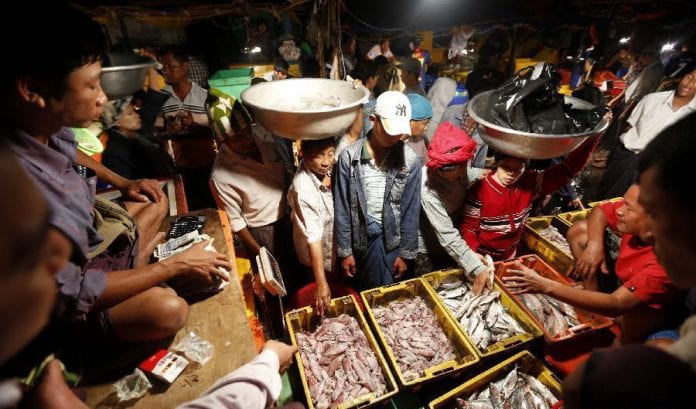 Myanmar Fishery Federation (MFF) announced that a new international standard wholesale fish market is to be built in Twante township in response to a directive from the president.

A team, led by Minister for Cooperatives U Kyaw San, has conducted field assessments for the construction of the new market, but a location and project timeframe have yet to be revealed, U Win Kyaing, secretary of MFF, said.

“Our federation agrees with the plan to construct a new international standard fish market. However, we do not know the details of the plan being overseen by the Ministry of Cooperatives,” he added.

In May, a new fish market named “Shwe Padauk” opened near the wholesale fish market in Kyeemyindaing township. Shwe Padauk market has 400 stalls with the dimensions of 18 feet by 11 feet wide, 270 of which have been already been sold.

However, only one seller is currently running business, said U Than Lwin, chair of MFF.

“There were 10 sellers just after the opening, but due to a low-level of customers and earnings, only one is left. Many sellers are still doing business at other cramped spaces instead of the wide and clean space provided here,” he said.

According to MFF, Myanmar’s fish export earns $600 to 650 million per annum, while neighbouring Thailand and Vietnam are exporting fish products worth up to $7 billion every year.

Also, Myanmar needs to adapt to internationally accepted practices in fishing, storing fish stocks, loading and unloading as well as taking sterilisation measures in preparation for market expansion when the upcoming ASEAN Economic Community (AEC) comes into effect in 2015.

The government has chosen Twante township as the destination for the new fish market because of its easy access to transportation networks over both land and sea.