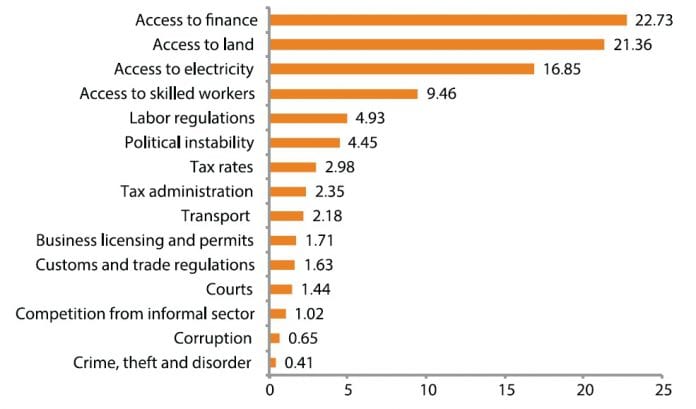 Reforms of Myanmar’s investment climate are urgent across a number of areas, especially access to finance, land, electricity and skilled workers, which were identified as the top constraints in a survey by the World Bank Group.

The Washington-based lender said addressing these key constraints is critical to ensuring a fair and transparent business environment in which all private enterprises can grow and create jobs.

Some 23 percent of firms identified access to finance as the top barrier to their operations – just 30 percent of the surveyed firms have a bank account, by far the lowest figure in the region.

More than a fifth of those surveyed indicated access to land as the main problem, while 17 percent and 9 percent cited access to electricity and access to skilled workers as their primary constraints, respectively.

The Enterprise Survey was carried out this year, covering Yangon, Mandalay, Monywa, Taunggyi, and Bago. This survey of private sector firms in Myanmar included interviews from more than a thousand foreign and domestic non-agricultural businesses, in manufacturing, retail and other services.

“The findings from the survey offer not only a good snapshot of Myanmar’s current situation, but also allow comparison across countries, in order to assess the business environment and barriers facing firms doing business in Myanmar,” Seck said.

The survey was supported by the UK’s Department for International Development, and has been carried out in collaboration with the Ministry of National Planning and Economic Development.

The Bank’s Enterprise Survey data and Doing Business Report recommend reforms to improve the investment climate in countries around the world. A detailed Investment Climate Assessment will be published by the Bank in early 2015, it said.

The newly launched Doing Business 2015 finds that Myanmar made trading across borders easier by reducing the number of documents required for exports and imports. Myanmar was among 15 out of the 25 economies in East Asia and the Pacific that implemented at least one regulatory reform to ease business during the fiscal year that ended in June 2014.

However, apart from that bright spot Myanmar ranked at lowly 177 out of 189 countries in terms of ease of Doing Business Index 2015, moving only one rank up from its previous position last year.