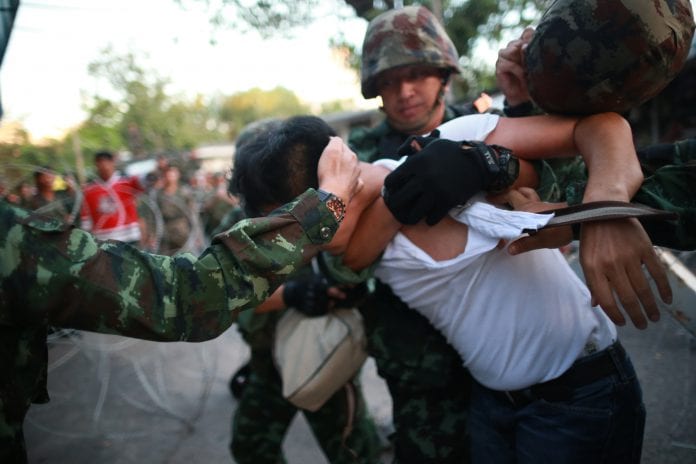 Conventional wisdom dictates that coups in Thailand are less serious than in other countries because they occur there more frequently. The argument goes that coups therefore don’t present a threat to Thailand’s stability. This “coup complacency” is dangerous and shortsighted, particularly from an investment perspective. Although proponents of coups, such as the one that occurred last May, argue that they are necessary to prevent political deadlocks, in the long term coups may be undermining Thailand’s ability to reconcile disagreements through political means, thereby deepening societal rifts.

There are already large segments of the population that feel politically alienated in Thailand, and their levels of dissatisfaction are growing. There is also ongoing sectarian violence in Southern Thailand that, after a brief respite, has re-escalated back to claiming dozens of lives every month. Thai authorities reported, for instance, that 320 bombings occurred in 2013 in the south compared to 276 in 2012. Between these two well-known troubles and other simmering concerns, including high levels of human trafficking and gun murder rates, not all is well in the ‘Land of Smiles’.

It is probable that Thailand will recover from this coup as it has in the past. By some indications, Thailand is already on the right track towards regaining stability: The Ministry of Finance recently announced positive expectations for Thailand’s economic performance, an interim government has been established, and elections are set be held next year.

It is also possible, however, that the coup is a temporary bandage that has done little to address fundamental dilemmas. If the latter is the case, then woe be the investor who discounts the possibility of a deterioration in Thailand’s political risk and security environment. As such, investors in Thailand should develop contingency response plans that include the following three elements:

– Investors should specifically identify triggers that justify corresponding actions. For instance, should widespread violence emerge in Thailand, it may become necessary to carry out a comprehensive exfiltration plan that entails evacuation of personnel and monetisation of physical assets (this latter action will become more difficult the longer an investor delays, given that asset liquidity declines in times of crisis). However, should the unrest remain largely confined to struggles for political leadership that have little impact on business, a hunkering-down approach that simply downsizes operations may be more appropriate.

– Investors should maintain commercial intelligence programs. This gives them a leg up in imagining potential scenarios and developing responses; allowing them to more effectively target potential allies with whom to build relationships. Such a program depends upon a network of well-placed individuals who provide insight into developments in business and political arenas. It is wise to maintain a commercial intelligence program consistently, not just in times of crisis, so as to transcend beyond reactiveness to foresight.

Adopting the above measures will allow investors to better anticipate turmoil in Thailand, should it occur. These measures will also let investors implement calculated responses in times of crisis, rather than react in a haphazard, panicked fashion. Again, it is by no means certain that Thailand’s political instability will increase or that foreign companies will need to drastically alter their operations as a result. However, the investor that disregards such a potential is setting himself up to be caught flat-footed should the situation worsen.

Nicholas Borroz is an independent analyst of energy geopolitics and investment strategies, specialising in energy-related infrastructure. He works for a DC-based risk consultancy and has previously worked for the US government in international affairs with a focus on development, energy, and economics. You can reach him on Twitter at @NBorroz or on his blog, www.nicholasborroz.wordpress.com.