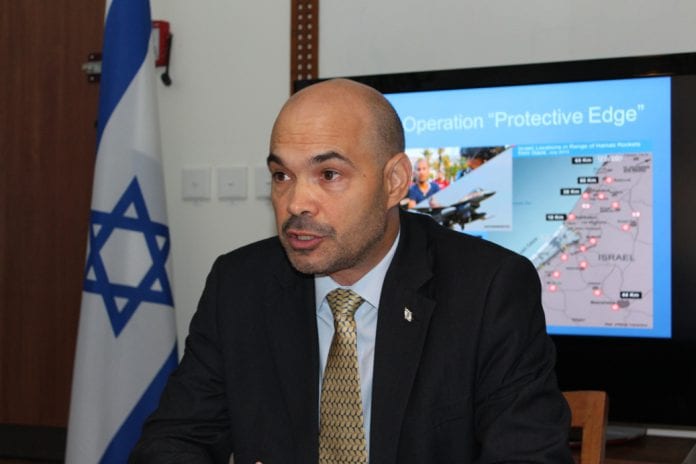 In a briefing with Myanmar journalists at the Israeli Embassy in Yangon on Tuesday, Israel’s Ambassador to Myanmar Hagay M Behar presented the challenges Israel faces in achieving the objectives of “Operation Protective Edge.”

Operation Protective Edge is Israel’s response to an increase in the volume of rockets fired into Israeli territory beginning on July 7 by Hamas and other militant groups in Gaza.

Ambassador Behar said the goal of the operation is to target military leaders, eliminate weapons deposits and destroy the tunnels Hamas has constructed to transport weapons and carry out attacks within Israel.

To date, the UN reports 364 civilians and 76 militants killed on the Gaza side, while 2 civilians and 29 soldiers have been killed on the Israeli side. Over 100,000 Gazans have been displaced since Israel began its ground invasion of Gaza on July 17. Meanwhile, millions of Israelis remain within range of Hamas missiles, forcing them to confine themselves to bomb shelters while rockets fall overhead.

Israel has come under heavy criticism in international media for the disproportionate toll Operation Protective Edge has taken on civilians in Gaza.

Addressing Israel’s critics, Ambassador Behar told the convened journalists, “The biggest mistake the press could make would be to analyse this conflict based on numbers.

“The question [of numbers] makes it seem like Israel needs to make excuses for not having many casualties.”

The ambassador attributed the imbalance in casualties to the effectiveness of Israel’s Iron Dome missile defense system, which intercepts missiles threatening civilian populations in Israel with a success rate of 90 percent, and to Hamas’s practice of storing weapons and quartering militants in schools, hospitals and mosques.

Behar further petitioned the crowd, “Imagine thousands of rockets falling on the Shwedagon Pagoda, Bagan, the parliament building. Would you sit and debate, waiting for the international community to come up with a solution?”

The point of the analogy, the ambassador said, was that Israel has no other choice but to confront Hamas militarily.

However, he said, all three of Israel’s border crossings with Gaza remain open for the transfer of humanitarian aid to Gazan civilians, even as the conflict continues.