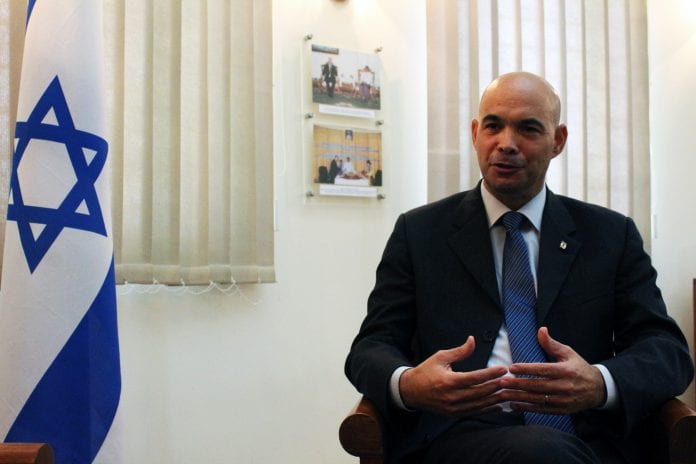 Currently, Israel and Myanmar have over $100 million in long–term trade agreements, compared to just $2 million in trade in 2012, the departing Israeli ambassador to Myanmar said.

“I don’t see any reason why trade between the two countries in a few years won’t be similar to the volumes of trade that we have with other Southeast Asian countries like the Philippines and Vietnam,” Hagay M Behar told Myanmar Business Today in an exclusive interview.

Behar added that these figures are difficult to estimate exactly, as they are often executed through third-party companies.

Israel’s biggest mark in Myanmar is in investment in education, agricultural and healthcare technology. Because Myanmar and Israel have similar arid climates in some regions, Israeli technology have immediate practical applications in Myanmar, specifically drip irrigation and water management techniques.

Two Israeli companies, Ledcor Technologies and Mer Telecom, have been involved in the recent telecom boom, providing equipment and infrastructure.

Behar said that the distance between the two countries could actually be considered a trade advantage, because as Myanmar develops, it will not be competing in the same markets as Israel.

A recent development has been the solidification of the terms on an agreement to protect investments.

“Even with the changes that are taking place in Myanmar, there are still plenty of obstacles, and I believe that the moment the Israeli businesspeople believe that there is a framework of protecting their investment, it will be easy for them to enter the Myanmar market,” the Israeli Ambassador said.

Behar said the Israeli government has invested more in Myanmar than private companies, but that private investment is expected to greatly increase.

Myanmar was in the past an exporter of rice to Israel, and this could be the case in the future, as Myanmar once again has the potential to become a major food exporter.

He stressed the need for trust and reliability for foreign businesses in Myanmar. “One of the things that I really admire here that people try not to be too complicated. It takes you a lot of time to gain their trust, and that’s something you have to work on, but the moment that you gain their trust, it’s not a matter of price. The moment that they think you are reliable, it can open a lot of doors.”

He emphasised that the transition process in Myanmar had already achieved a great deal and that the international community should value patience, maintaining stability and understanding the needs of the Myanmar people.

“The people and the leadership here knows the people better than we do, and that they understand that changes should come gradually,” Behar said, adding, “I believe that the responsibility of the international community of allowing and supporting this process to continue is very high.

“When I say the support of the international community, it is not to patronise, but to learn the obstacles, to see what could be achieved, and support it step by step.”

Behar said that he is proud but critical of international aid, saying that, “We should provide them [Myanmar] with help that can lead them to the 21st century, not the 20th,” specifically referring to educational advances such as e-learning and remote healthcare consultation, both specialties of Israeli tech companies.

Behar is returning to Israel after serving only two years as ambassador to be closer to his children currently serving in the Israeli Defense Force. During his time here, he traveled to almost every state in Myanmar.

Israel has had a relatively long diplomatic relations with the Myanmar government, dating back to the opening of an embassy in 1953.