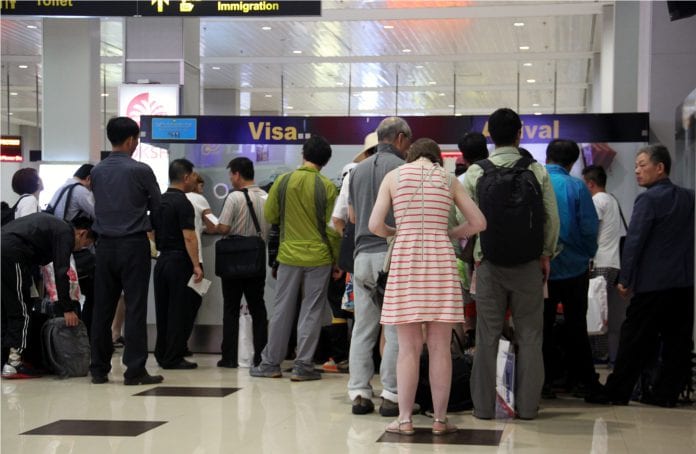 Myanmar’s E-Visa program, which was launched on September 1, was implemented with an investment of $17 million, said U Kyaw Moe Naing, managing director of Myanmar Ease Net Co, the company contracted to operate the system.

The company, working in a joint venture with the Ministry of Immigration and Population, has been approved to run the system for a total of 10 years – an initial five-year term with an automatic extension of another five-year term.

“The company will mainly provide technology and IT equipment. We have hired two foreign IT technicians, one based in Myanmar and other in Singapore,” U Kyaw Moe Naing told Myanmar Business Today.

The company bore the expenditure of the joint venture, while the earnings will be divided as the terms state in the tender, U Maung Maung Than, director general of the Department of Immigration said.

“The database for the E-Visa program will be stored inside the country, while back up servers are located abroad for security measures, which also lends to the protection against loss of data,” U Khin Yi, union minister for immigration and population, said.

Originally, 41 countries were approved for the E-Visa program, and two more countries were added at the request of the Union of Myanmar Travel Association (UMTA). Currently, holders of an E-Visa are only allowed to enter through Yangon International Airport, but eventually points of entry will be expanded to include airports in Mandalay and various other towns and cities soon, U Khin Yi said.

Myanmar issues six types of visas comprising: tourist, business, entry, transit, diplomat and multiple entry visas. In June 2012, the government started easing visa restrictions by allowing visa on arrival for business, entry and transit visas. The launching of E-Visa program is a continuation of the government’s efforts to ease entry restrictions for those wishing to visit Myanmar.

“E-Visa has been needed for a long time. There’s no doubt the tourism sector will gain benefits from it. It will be better if all of the countries in the European Union are included,” U Hla Aye, member of the central executive committee at UMTA, told Myanmar Business Today.

According to the ministry, applicants for E-Visa are required to have a valid passport for at least six months, photos taken within the past three months and pay a non-refundable fee of $50 before the application is approved.