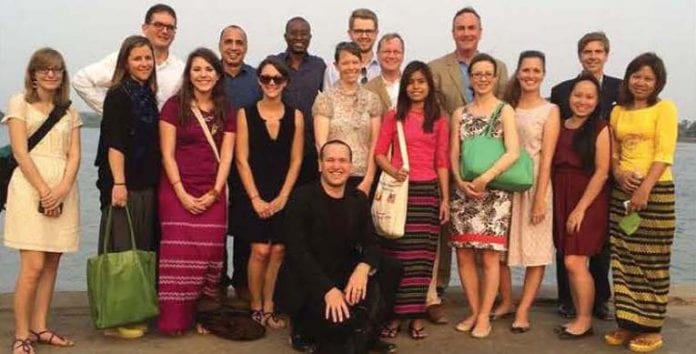 There are days in Myanmar when you’re not really sure how progress will ever prevail. But there are just as many days when you think that the rapid change that you are witnessing can never be reversed and historical events are taking place right under your feet. It is this dichotomy that grabs not only the people who live here but also those that spend a week here falling in love with the country and contemplating whether the time is right to invest and bring their business to Myanmar.

I have to admit I was apprehensive when I was approached about organising a delegation to Myanmar this spring. I’ve seen many delegations come and go with no real, concrete outcomes for anyone living here. The top tier government officials, business leaders and civil society members are overtaxed with meetings of people doing assessments. But once they’ve gone, nothing transpires on the ground here. The follow through is not entirely up to the business tourists, of course, and is shared with the local businesses and NGOs, but the whole transaction feels the same: information was obtained by the foreigners, lunch was eaten, and never do we hear from any of them again. It seems like a take, take, take game when there is very little left to give.

It is with that trepidation that I promised to help organise a different kind of delegation. The delegation was to be co-led by the Richardson Center for Global Engagement, Aspen Institute and the US Department of State. Twenty-two delegates from around the world would be coming to Myanmar on what we call our Partnership Opportunity Delegation. Our goal was simple: create partnerships between Myanmar and foreign entrepreneurs to benefit people in Myanmar.

Luckily, my colleagues were able to pull together a really unique group of people dedicated to change who have had success in just as challenging of countries. Our delegation was made up of State Department officials, impact investors and social entrepreneurs. They have worked in places such as India, Mali, Haiti, Kenya and China and understand a thing or two about lack of infrastructure, rule of law and human capital. They understand when Facebook isn’t accessible 24 hours a day and electricity isn’t guaranteed no matter how nice the hotel. They’ve seen it all before so we could dive right into talking about the solutions, instead of the problems.

For example, one of our delegates, Toni Maraviglia with Eneza Education, who created a virtual tutor and teacher’s assistant application for mobile phones, works in Kenya where a lot of the same problems exist, but she is excited by the unique opportunity caused by previous lack of development, “to leapfrog a lot of what didn’t work in development and apply what does work here.”

We prepped the delegates before they arrived, introducing them to some of the players in the area of their interest and sending them information about the business climate here. It was important that they hit the ground running – and hit the ground running is exactly what they did. They astutely picked the brains of the US Ambassador, President U Thein Sein’s economic advisor, members of the business associations and the Ooredoo Myanmar CEO the first day they landed.

They knew it wasn’t all rainbows and moonbeams here in Myanmar but they also didn’t have a dire outlook of starting people-friendly businesses in one of the least developed countries. And that’s the best understanding you could take away. Investment and business is difficult here, but it’s difficult in every economy where you’re the first mover and the risks sometimes produce great rewards. Our delegates know that because they’ve seen success and they’ve seen failure in their various business ventures but all of them share a passion for trying to bring prosperity to people at the bottom and middle rungs of the ladder.

Our focus was on real outcomes and we are still trying to make those partnerships happen long after everyone has gone home. Thankfully, we were successful in sparking quite a few partnerships and that will lead to economic development led by small businesses, which will be the real catalyst to change in Myanmar.

Maraviglia and her partners now see huge potential in Myanmar to expand after visiting in April. “Myanmar was not even on our map in terms of expansion before this trip. But the delegation made us think differently about our strategy and where we wanted Eneza to reach. We are definitely looking at Myanmar as a place of expansion,” she said.

Most exciting was the reaction by entrepreneurs and community leaders who were quick to recommend points of entry, offer up ideas to manufacture and distribute the products and grow the Myanmar economy from the inside. Our delegates took these ideas and ran with them and now have exciting opportunities on the ground in cooperation with those who know the local economy the best.

Mouhsine Serrar with Prakti, a developer, manufacturer and distributor of cookstoves, was able to meet with potential partners while he was here on the delegation and already has several pilots in the works.

In addition to meeting with business and community leaders, we also went to Nay Pyi Taw to meet with various ministers. Surprisingly, the government did not just pay lip service to our delegates’ ideas during our meetings; they embraced their models for energy efficient cookstoves, tools to efficiently transport water for families, fortified rice and cooperative milling. They “warmly welcomed” the entrepreneurs to start working on the ground here and offered to be of assistance if we encountered any problems. And we will hold them to those promises because we are bound to run into some bumps in the road.

It won’t be easy. It never is. Import issues, manufacturing products with a touchy electrical grid, unclear rules and regulations and a need for increased government transparency, give people little faith in the market. One of our investors on the trip, Mark Quinn-Newall, was concerned mostly about “the laws backing up the signed contracts and agreements in order to protect ownership and give some clear picture of everyone’s rights in potential future situations.” This is obviously a concern for most investors here and while the government has tried to pass laws clarifying those issues, the major test is what will happen in reality. Luckily for these small entrepreneurs that are entering the market here, the risk is minimal and the reward is not just financial but beneficial to the manufacturers, distributors and end users.

In a meeting with our delegates, Daw Aung San Suu Kyi cautioned us about being overexcited about the near future. While we encourage caution, this is also a time to embrace the new opening of the market, especially for small-scale entrepreneurs. Our delegates’ main goal is to help people through economic development. Creating innovative products and finding a way to develop and market them in the local economy by providing jobs is the best way to pull people out of poverty. That’s true in America and that is true in Myanmar.

“We wanted to focus on bringing and developing small businesses in Myanmar, instead of the major multinationals since small businesses account for the majority of jobs around the world. The needs of small businesses are very different than those of multinationals, and by bringing those to the attention of the ministers while we were there, we hope to have them catered to more,” said Mickey Bergman, coordinator of the delegation for the Aspen Institute and the Richardson Center for Global Engagement.

Instead of letting all the usual suspects create new businesses and reap all the rewards, we must aid the entrepreneurs in jumpstarting their businesses here through partnerships like these. Our delegates will be back to Myanmar with their innovation that is vital to the growth of this country and I’m excited to help them on this adventure.

My worry about “just another delegation” was quickly put to rest when I saw Cynthia Koenig from Wello Water remove her small model of the water wheel from her bag to show the minister for agriculture and he immediately asked how quickly we could start producing them in Myanmar. Hopefully she and the other social entrepreneurs from the delegation will soon be on the ground in Myanmar. It’s important that people come to Myanmar to understand the barriers and benefits of doing business here, butmost important is the follow through – and now it’s all about the follow through.