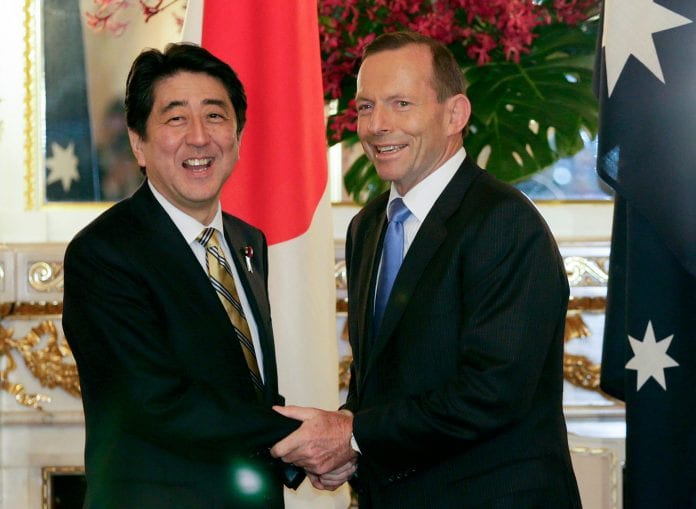 Japan and Australia clinched a basic trade deal last week to cut import tariffs, as US and Japanese officials stepped up efforts to reach a parallel agreement that would re-energise stalled talks on a broader regional pact.

The agreement between Japan and Australia comes as the United States and Japan push for their own two-way trade deal – a key component of a broader US-led Trans-Pacific Partnership (TPP) pact – before a visit this month by President Barack Obama.

Australian Prime Minister Tony Abbott and Japanese Prime Minister Shinzo Abe confirmed a basic agreement on the deal at talks in Tokyo, and agreed to work towards signing it as soon as possible, the two sides said in a statement.

“This basic agreement has historical significance for getting the two countries closer together.”

The bilateral deal, expected to be finalised when Abe travels to Australia in July, features cuts to Japanese tariffs on Australian beef – including a halving of the levy on frozen beef to 19.5 percent with deep cuts in the first year – and an end to an Australian duty on cars.

A deal with Australia that lets Japan keep even reduced tariffs on politically sensitive agricultural products such as beef gives Japan ammunition against US demands to scrap tariffs in the TPP deal, which aims to remove import levies, experts said.

Such a deal means “Australia gets preferential treatment over the US, and America will be under pressure to strike a TPP deal short-term that puts it on a level playing-field with Australia,” said Aurelia George Mulgan, a professor of Japanese politics at the University of New South Wales.

Washington and Tokyo are each urging the other to be more flexible on the sticking points of access to Japan’s farm and car markets and US tariffs on imported cars and trucks.

The TPP is a centrepiece of Obama’s push to expand the US presence in Asia. The talks have entered their fifth year. The Japanese and US economies dominate the grouping, which encompasses one-third of global imports and exports.

“What is going on is a game of chicken,” Mulgan said. The US and Japan “want an agreement but they are not prepared to pay a high price. Japan knows that America wants it on board because TPP without Japan is not worth all that much. Japan is playing hardball.”

The United States wants Japan to open its rice, beef and pork, dairy and sugar sectors – areas Abe has vowed to defend. Japan wants a timetable on US promises to drop tariffs of 2.5 percent on imports of passenger cars and 25 percent on light trucks.

Advocates say the TPP could accelerate global economic growth, boost US exports and level the playing-field between emerging and rich nations in. The TPP talks, including Canada, Mexico, New Zealand, Malaysia and others, missed a deadline for an agreement by the end of last year.

Abe and Abbott also stressed close security ties as Japan seeks tighter relations with regional partners to cope with a rising China. They agreed to start talks on cooperation in defence technology and equipment, following Japan’s recent overhaul of a decades-old ban on arms exports.

“The relationship between Australia and Japan is about much more than economics and trade and growing wealthy together,” Abbott said at the news conference. “It’s about respect, it’s about values and that’s why this is such a very strong partnership.”            Reuters