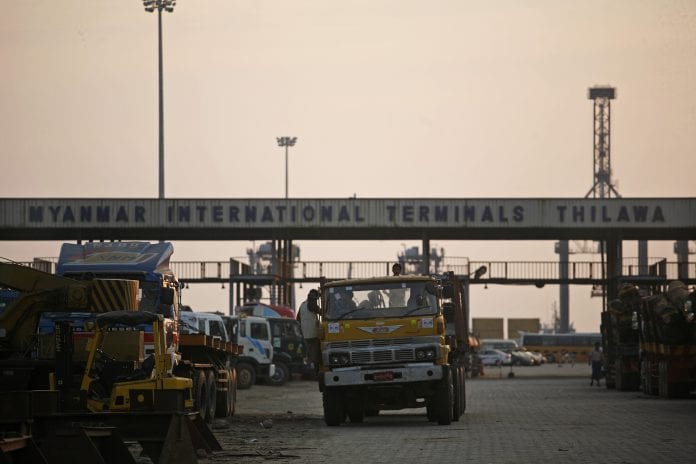 Companies from Myanmar and Japan signed an agreement last week to develop an industrial complex at the Thilawa Special Economic Zone located on the outskirts of Yangon.
The consortium – including Japanese companies Mitsubishi, Sumitomo and Marubeni – will form a partnership with the Myanmar government as well as local companies to develop the “Class A Area” of the SEZ, designated for initial development.
Work for this aspect of the project is expected to include the construction of roads, sewage treatment equipment and further infrastructure at a 400-hectare area at the site, which is seen as a key development for increasing trade to the Southeast Asian century.
“We believe the SEZ will create a vast number of job opportunities for our citizens and for the transfer of technology, it will also compliment our national economic objectives,” said Finance Minister U Win Shein at a press conference to announce the latest deal in Tokyo.
The Japanese arm of the consortium will hold a 49 percent stake in the project, while Myanmar will control the other 51 percent.
“Myanmar has cheap and abundant labour power and we believe that Thilawa has very high potential as a production base,” said Toru Kabeya, an official from the Transport Infrastructure Project Department of Marubeni.
Japan has sought closer ties with Myanmar since a quasi-civilian government led by President Thein Sein came to power in 2011 and began implementing a raft of changes to attract international investment.
Large-scale Japanese companies such as Nissan, Canon and Hitachi have announced plans to begin operations in the former pariah state and Japanese firms have been successful in a number of tenders, particularly with regards to infrastructure.
As a sign of improved bilateral relations between the two countries, President Thein Sein visited Tokyo last year, while in May this year Japanese Prime Minister Shinzo Abe made the first visit by a Japanese leader in almost 40 years. During that visit, Abe wiped much of Myanmar’s $6.6 billion debt to Japan.
The Thilawa project is expected to begin commercial operation in 2015.
Myanmar is also wooing Japanese companies to be involved in a number of other infrastructure projects in the country.