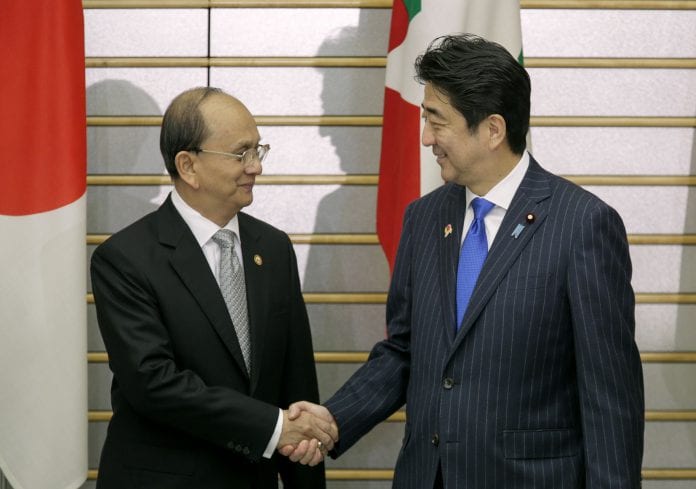 Japan and Myanmar have signed an investment treaty to nurture closer business ties as the once secluded Southeast Asian country opens its fast-growing economy to more foreign businesses.

Prime Minister Shinzo Abe and Myanmar President U Thein Sein signed the investment treaty on the sidelines of a three-day special summit meeting in Tokyo between Japan and the Association of Southeast Asian Nations (ASEAN).

Japanese businesses have been eager to invest in Myanmar and have stepped up their activities here after Thein Sein’s reformist government came to power in 2011 after nearly 50 years of military rule.

Japan’s trade ministry said the agreement is intended to provide greater protections and a stable legal environment for investors.

Under the treaty, Japanese businesses operating in Myanmar will be granted equal rights to local companies and Myanmar companies doing business in Japan will receive the same treatment.

The treaty calls for Japanese investors to receive the same protections provided to other foreign investors under international rules and prohibits the imposition of export, technology transfer or other requirements in exchange for such investments. It is also intended to improve transparency, key for a country struggling with endemic corruption.

The Japanese government hopes to promote the business expansion of Japanese companies in Myanmar, a market closely watched for strong growth prospects thanks to progress in economic reform.

Myanmar President Thein Sein said he was confident that the treaty would expand investment opportunities for Japan.

If the treaty is ratified by both countries, Japan will have concluded investment treaties or economic partnership agreements laying down investment rules with all 10 ASEAN member countries.

Attracting foreign investment and lending is crucial for aiding the expansion of Myanmar’s resource-rich economy. Myanmar has significant growth potential but is burdened with an inefficient farm sector. It also lacks a manufacturing base after decades of foreign sanctions and restrictive laws under military rule.

Japan is Myanmar’s largest aid donor. To help clear the way for the investment treaty, Tokyo agreed to forgive about $5.32 billion in debt owed by Myanmar and extended bridge loans to help clear the rest.

Abe has promised to help support Myanmar’s economic and political reforms with both public and private help, including fresh loans for infrastructure building and major development assistance that will support Japanese business interests in the Southeast Asian nation.

Japan had close ties with Myanmar before the junta took power in 1988 and Tokyo suspended grants for major projects. Japan did not impose sanctions on Myanmar in 2003 when the military regime put pro-democracy leader Aung San Suu Kyi under house arrest, unlike the US and other Western countries, though it did scale back most business activities and cut government aid.

Japan’s investments in Myanmar still lag behind those of China and India, though that is fast changing. Trading companies Mitsubishi Corp, Marubeni Corp and Sumitomo Corp are leading a project to develop the 2,400-hectare (5,900-acre) Thilawa Special Economic Zone, located near Yangon, Japan’s biggest investment in Myanmar so far.