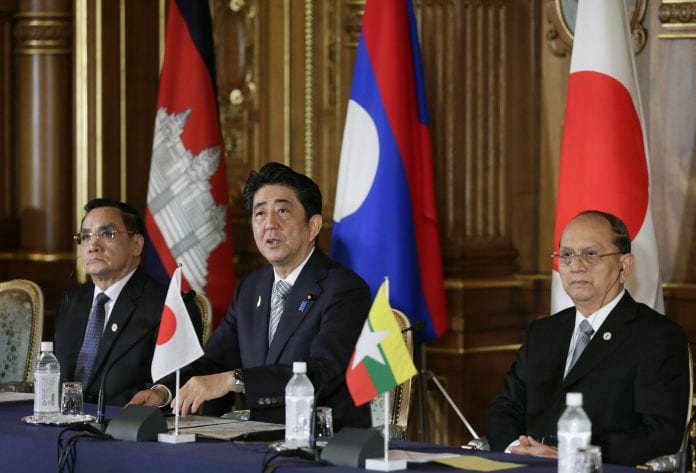 Japan said it would  extend around $6 billion in development aid to Mekong region countries, as China launches a new institutional lender seen as encroaching on the regional clout of Tokyo and ally Washington.

Cambodia, Laos, Myanmar, Thailand and Vietnam all have strong economic growth potential, and are promising destinations for Japanese exporters of railway systems, power plants and other infrastructure.

Tokyo’s planned assistance of about 750 billion yen over the next three years follows a pledged aid of 600 billion yen to the five nations in the preceding three-year period. The fresh aid was announced at the conclusion of a summit meeting in Tokyo between Japanese Prime Minister Shinzo Abe and the Mekong region leaders.

China, while rapidly modernising its military, has built artificial islands in areas of the South China Sea over which several other countries have rival claims, stoking regional tension.

“Both sides noted concerns expressed over the recent development in the South China Sea, which will further complicate the situation and erode trust and confidence and may undermine regional peace, security and stability,” a summary of the Japan-Mekong cooperation agreement read, in a veiled criticism of China’s recent maritime expansion.

Japan in May unveiled a plan to provide $110 billion in aid to drive Asia’s high-quality and environmentally friendly infrastructure projects.

That contrasts with the China-led Asian Infrastructure Investment Bank (AIIB), whose projects Washington has said may not properly safeguard the environment.

Sino-Japanese relations have been plagued by territorial disputes and the legacy of Japan’s wartime aggression, although ties have seen a thaw since Abe and Chinese President Xi Jinping held their first summit last year. (Reuters)