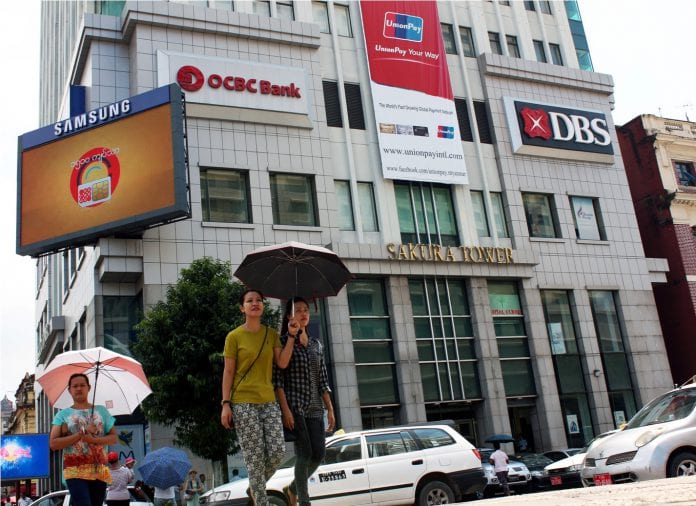 Myanmar has granted preliminary licences to nine foreign banks to operate for one year in the latest sign of the former pariah state’s sweeping economic liberalisation.

“Banks that can support economic development in Myanmar have been selected,” U Kyaw Kyaw Maung, governor of the Central Bank of Myanmar (CBM), told reporters at a press conference announcing the results in Nay Pyi Taw.

Of the 42 foreign banks that have representative offices in Myanmar, 25 submitted final proposals and they were scrutinised on the basis of qualitative criteria, he added.

Commenting on the selection process, Edwin Vanderbruggen of legal advisory firm VDB Loi, which assisted a number of the foreign banks submitting proposals, told Myanmar Business Today, “In my experience, bidding for a tender with the Myanmar government are a question of ‘go big or go home.’ You need a bidder who is able to look past some of the unavoidable uncertainties associated with the Myanmar market at this point in time. Bankers are inherently careful, so that is a bit of a mismatch.”

Dr Sean Turnell, associate professor of economics at Australia’s Macquaire University and an expert on Myanmar’s economy, told Myanmar Business Today, “The tender seems to have gone well. I was pleased to see the number of licences was at the upper end of expectations.”

The selected lenders are only allowed to open one branch each and will have to put down $75 million as initial investment, $40 million of which has to be deposited at CBM as a pledge to not leave the country in a sudden, the governor said.

The banks will have to satisfy the commitments promised in their proposals, deliver functional banking operations and comply with CBM’s regulations during the first 12 months before CBM grants the final licence.

The licence will allow the banks to operate wholesale banking in Myanmar and lend to foreign firms and local banks in international currency and Kyat.

“In itself this move is a good one, though I would have liked foreign banks to have been free to lend to local Myanmar businesses, rather than just to foreigners and local banks,” Turnell said.

U Set Aung, deputy governor of the CBM, said as local firms remain unrated, the winning foreign lenders will have to cooperate with local banks or use them as mediums to lend to local firms.

“The licensees are expected to contribute to the development of the domestic banking sector notably but not exclusively by participating in the interbank market, by lending to domestic banks to support their financing activities of domestic corporations and by engaging in foreign exchange,” Edwin said.

The licences, at this time will not provide these banks with permission to conduct retail banking services – which is expected at a later date, he added.

If a bank withdraws from the country for any reason, the gap would not be replaced but a new tender may be floated as per the market requirement, U Set Aung said, adding more banks will be approved through tenders if the market requires so.

A bill concerning banking and financing is still being deliberated in the parliament and before a new law is passed the industry will be governed by existing laws and directives from CBM, he added.

“For some of our clients, the uncertainty of the financial regulatory framework in Myanmar such as bank supervision and the interbank market seemed to be a bit of an issue when pondering the extent of the commitment they would be able to take on,” Edwin said.

All three Japanese banks that put in a proposal won licences, emphasising Japan’s growing dominance in Myanmar, where it is getting involved in mega projects such as the Thilawa economic zone near Yangon.

“Japanese dominance [was] expected. These are very big institutions, and the Japanese government have provided much assistance for financial sector reform,” Professor Turnell said.

From Singapore, both UOB and OCBC won, presumably because they are traditionally well-capitalised, while another Singaporean giant DBS didn’t make it to the winners’ list.

However, the absence of South Korean banks have surprised some, given the country’s growing engagement in Myanmar’s economic reforms. None made the cut out of three South Korean banks – Industrial Bank of Korea, Kookmin Bank and Shinhan Bank – who submitted a proposal to the CBM.

“Some of our Korean clients are indeed asking how it is possible that no Korean bank was awarded. The banks themselves seem to not know why,” Edwin said.

However, Professor Turnell said: “Though other Korean businesses are prominent in Myanmar and elsewhere, that country’s banks ‘punch below their weight’ – so their absence was not unexpected.”

Also, banks from Vietnam, Taiwan and India failed to clinch a licence, while the only EU bank that submitted a proposal, BRED Banque Populaire, missed out.

From Malaysia, Maybank beat out CIMB and RHB. Maybank has been longer in Myanmar than the other Malaysian banks, which might have helped, Edwin said.

ICBC is, as only Chinese bank submitting a proposal, not a surprise, while ANZ, given its strong presence throughout Asia, was also an expected winner, he added.

He said UOB will work “even more closely” with the Central Bank and Myanmar local banks to provide financial solutions for the banking community and multinational companies that invest in the country.

ANZ CEO International and Institutional Banking Andrew Géczy said: “Given its size, economic potential and its strategic position between China and India, Myanmar is forecast to be one of the fastest growing economies in the region over the medium term.”

Géczy also acknowledged the support of the Australian Government in gaining its licence approval. “The Australian government has played an active role in supporting Myanmar as it implements its economic reform program and we are grateful for the assistance it has provided in supporting our application.”

BTMU, which acted as an agent bank for the Japanese government’s ODA yen loans and grant aid to Myanmar, said it will further enhance its financial services in response to the needs of its customers operating in Myanmar. Another Japanese bank SMBC said, “The foreign bank licence will enhance SMBC’s ability to provide a wide range of banking services and support for clients expanding their businesses in Myanmar.”

Mizuho Bank said in a statement: “With a wealth of natural resources and an excellent labour force, Myanmar has many attractive features as an investment destination, and we believe that the number of corporations expanding their businesses into the country will increase dramatically.

“We also have strong expectations for Myanmar as a consumer market, given the size of its population, and we are projecting further economic growth there as a member of ASEAN.”

The bank said opening the Yangon Branch will enhance Mizuho’s structures to support customers as they enter the Myanmar market and develop their businesses here. “It will also enable us to contribute further to the development of industry, financial markets, and human resources in the country.”

Maybank, the fourth largest bank by assets in ASEAN, said the new licences will facilitate the foreign banks to participate in previously restricted services in Myanmar.

Group President and CEO of Maybank, Datuk Abdul Farid Alias said that the licence will help further strengthen the group’s regional footprint as well as its capabilities in serving customers seamlessly throughout ASEAN.

“We hope to facilitate greater cross-border trade between Myanmar and our core markets as well as Greater Mekong Subregion, particularly in Yunnan upon the opening of our third China branch in Kunming,” he said.

“In line with our mission of humanising financial services, we also hope to continue to do our part in shaping Myanmar’s financial sector, and empower the Myanmar communities to accelerate socioeconomic growth.”

Being the only Malaysian bank awarded the foreign banking licence in Myanmar, Maybank said it looks forward to deepening its relationship with Myanmar through strong partnership with the domestic banks in the areas of international trade, interbank and capital markets.

Linus Goh, head of global commercial banking, OCBC, said: “This new licence will enable us to contribute to the growth and development of the economy in Myanmar through the financial services that we will offer our corporate and institutional customers keen to participate in the opportunities for trade and investment in this country.

The new OCBC Bank branch in Myanmar will offer a full suite of banking products and services that will include cash management, project financing, working capital financing and trade finance, as well as treasury and capital markets advisory and services, the bank said.

“We will also work together with our domestic banking partners to strengthen the foundation of the financial sector, by introducing new capabilities and innovative services to support its growth and transformation,” Linus said.