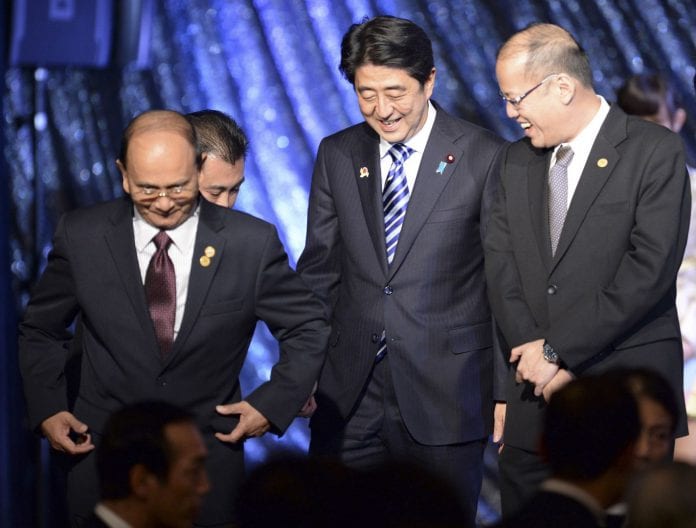 With Japanese Prime Minister Shinzo Abe having promised aid of ¥91 billion in loans to Myanmar in May, the total aid of Japan under his government is now more than ¥150 billion.

“We will continue to provide support, both at the public and private level, for infrastructure building initiatives and work toward Myanmar’s development,” Abe said at a joint press conference after meeting with Myanmar’s President Thein Sein, who came to Japan to attend the regional summit between Japan and the Association of Southeast Asian Nations (ASEAN).

The loans are designed to help build infrastructure for the Thilawa Special Economic Zone in the suburbs of Yangon, Myanmar’s largest city, and upgrade a railway network in Myanmar, among other projects.

Abe also pledged Japan’s support for Myanmar’s health and medical sectors, and postal system. He told Thein Sein during their meeting that he wants to “cooperate closely” with the president next year to “achieve major progress in developing the ASEAN region.”

Myanmar will hold the ASEAN chairmanship for the first time in 2014. Japan and Myanmar will mark the 60th anniversary next year of the establishment of diplomatic ties.

Tensions between China and Japan have mounted this year in the East China Sea over disputed islands. Beijing’s decision last month to declare an air defense identification zone in the area has added to the fraught atmosphere.

Abe, since coming to power a year ago, has promoted Japan as an ally for Asian countries that also are wary of Beijing’s growing regional clout.

These include Myanmar, a resource-rich nation that has long been in China’s sphere of influence, but whose military rulers have given way to a nominally civilian administration and opened the country to other foreign investors.

The Japanese prime minister said Japan would make an “effort to cooperate” with Myanmar and Thailand to develop the Dawei industrial zone in southern Myanmar.

Myanmar and Thailand are planning to develop a 6,000-acre project in Dawei, a southern port town close to the Thai border, and have sought to persuade Japan to join. The project envisages building crude oil storage facilities and a pipeline across the border, greatly reducing the cost of shipping oil to Thailand. But the plan, which was being backed by a Thai company, has stalled due to lack of capital.

Abe’s support for the development, although lacking details, is the strongest sign yet that Japan could join the consortium.

Japan’s more activist role in Myanmar is likely to be viewed in Beijing as part of attempts by the US to contain China in the region, analysts say.

The US and Japan have been among the most vocal opponents of China’s air defense zone in the East China Sea.

“It is clear that the Chinese view Japan in Myanmar as linked to the US policy of containment against it in the region,” David I Steinberg, a specialist on Myanmar at Georgetown University in Washington, told the Wall Street Journal.

Japan’s push is part of a wider strategy in Southeast Asia, where it has pledged $20 billion in aid and development loans for the next five years and engaged in closer military ties with governments.

China still remains by far the largest investor in Myanmar, with which it shares a border. The country has invested or pledged $14.2 billion in the country, a third of all foreign investment. That compares with $292 million from Japan.

China denies that it sees Japan’s growing role in Myanmar as a threat.

Yang Houlan, China’s ambassador to Myanmar, said in an interview that “all foreign investments could and should be a blessing for Myanmar.” He added: “Just because they are in, it doesn’t mean we are out.”

For years, Chinese companies made huge investments in Myanmar’s rare gems industry and in infrastructure. A $2.54 billion oil-and-gas pipeline that traverses Myanmar to China, and was funded and built by Beijing, opened earlier this month.

But there have been signs of strain in economic ties between the two nations. In 2011, Myanmar cancelled plans for China to build a $3.6 billion dam in Myitsone, citing environmental concerns. Other resource projects have met protests.

John Lee, a visiting fellow and China expert at the Singapore-based Institute for Southeast Asian Studies, told WSJ that China’s frustrations in Myanmar might open the door for Japan.

But China is unlikely to pull out of such a strategic area, Lee said. “If China wants to continue to pour politically-motivated money into Myanmar, then Japanese firms will find it hard to get a foothold.”