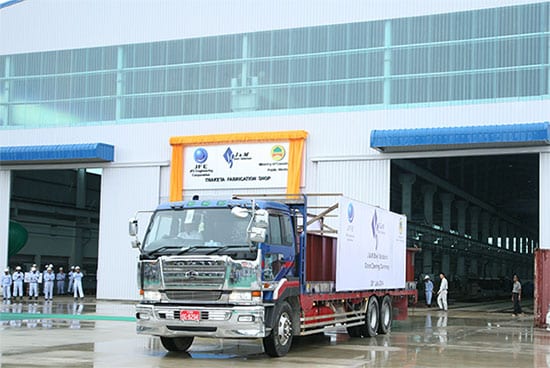 JFE Engineering’s Myanmar joint venture has launched its new plant in the country by shipping its first bridge block fabricated there, the Japanese steel giant said.

JFE Engineering and the Ministry of Construction established J&M Steel Solutions Co Ltd, a JV company for infrastructure construction, in November last year, and began construction of a plant in December that fabricates steel structures such as bridges in Thaketa township in Yangon.

The main facilities of the new 16-acre plant started operating in April and J&M announced construction of all facilities has been completed.

The bridge block of this first shipment is part of a 200-tonne truss bridge for one of Myanmar’s neighbouring countries, Laos. The plant is going to continue fabricating more blocks and is due to complete shipping them by August, JFE said.

The steelmaker said since the establishment of the company, J&M Steel has received orders from the ministry for steel bridge design, fabrication and construction-planning regarding bridges such as the Than Lwin Bridge to be constructed in Kayah state in eastern Myanmar and the Htee Gyaint Bridge across the Ayearwaddy river in Sagaing region.

In addition to these orders, JFE Engineering subcontracts the fabrication work which it receives from countries other than Myanmar to J&M Steel Solutions. The company’s order backlog now amounts to as much as 7,000 tonnes, it said.

Development of transportation infrastructure, such as roads and railways, as well as logistics infrastructure, including port terminals are seen as vital to sustain Myanmar’s recent economic growth.

J&M Steel Solutions said it is committed to contributing to the country’s domestic fabrication ratio which the country strives to increase, while developing itself by introducing Japanese advanced technological skills from JFE Engineering in such fields as harbour and coastal piers and container cranes.

JFE said it aims to leverage J&M Steel Solutions as the mother plant for infrastructure projects in regions including Southeast Asian countries, the Middle East and Africa in its effort to expand its overseas business.

The firm said it is also interested in offering its engineering expertise to the environmental and energy fields of Myanmar.

In addition to the Japanese supervisors dispatched from JFE Engineering, those who have been accepted at its Tsu Works as trainees to learn welding skills since 2002 (about 30) will join J&M Steel to introduce Japanese technology, the firm said.

JFE Holding’s main business is steel production. It also engages in engineering, ship building, and real estate redevelopment. JFE Holdings is the fifth largest steel maker in the world with revenue in excess of $30 billion.