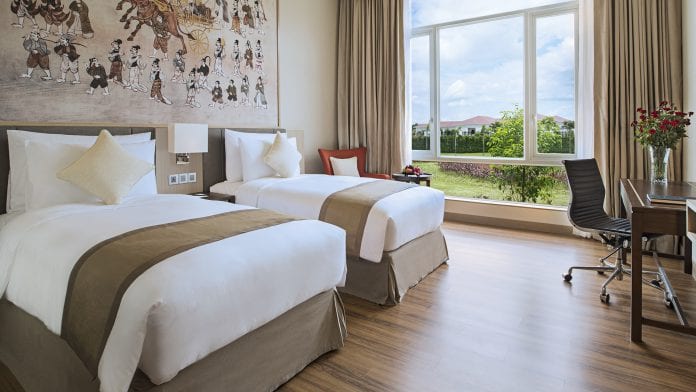 Kempinski Hotel Naypyitaw has introduced a Myanmar New Year special promotion, with discounts as much as 75 percent on its room rates.

The program is only for Myanmar people and the period of the promotion is from April 1 to May 31, the Swiss luxury hotel company said.

The promotion starts with K40,000 ($38.62) offering 75 percent discount and covers European buffet breakfast and internet at a “Deluxe” room for one night.

Kempinski launched its first venture in Naypyitaw in November last year. The 141-room hotel began welcoming guests during the first ASEAN Summit held in the capital.

The hotelier said it will open its second hotel in Myanmar in late 2016 at the former State House building on the corner of Sule Pagoda road and Strand road in Yangon.

Kempinski is working with Kanok Co from Thailand to develop its second Myanmar project, which involves renovating the original colonial architecture of the State House building, formerly known as the Small Courses Court and Police Commissioner building.

Kempinski has invested $45 million in the property owned by Kanbawza (KBZ) group, half of the investment in its Naypyitaw hotel. The 229-room hotel in Yangon will feature three restaurants, a swimming pool, a rooftop bar, a ballroom and a spa.