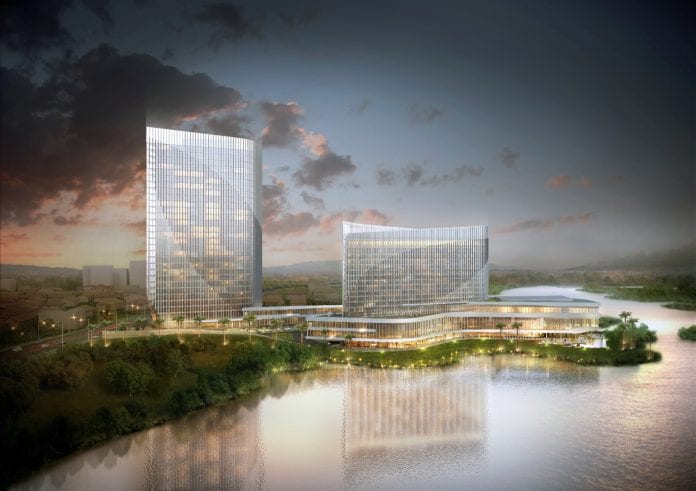 The POSCO trading arm and three other Korean companies will build a 15-storey luxury hotel and a 29-storey serviced residence building on a 2,183-square-metre site near Inya Lake, one of the most popular recreational areas in Yangon.

The three other players in the project are POSCO Engineering & Construction, Lotte Hotel and KDB Daewoo Securities.

POSCO Engineering and Construction said it had held a groundbreaking ceremony for the construction of the $220-million hotel last week.

The 15-storey luxury hotel building will have 346 guest rooms and the 29-storey development will have 321 rooms, making the project a new highlight in the city’s growing hotel market, along with convention centres and other amenities.

This project will be implemented on a build-operation-transfer (BOT) basis where the land lot will be leased for 70 years for the operation of the hotel, before being returned to the Myanmar government, which is currently renting out the land to the Korean consortium for free.

The hotel will be open for business in late 2016.

“Convinced of Myanmar’s growth potential thanks to its recent push for reform and opening-up, after half a century of military rule, POSCO E&C in association with Daewoo International, one of its affiliates, has proposed a project of ‘Hotel Development in Yangon’ to the Myanmar government as part of its drive to diversify its overseas business,” POSCO E&C said in a statement.

By becoming the first Korean contractor to create a building the firm said it “has secured the foundation for a head-start in Myanmar’s construction market.”

Daewoo International will take a project manger role while POSCO E&C will lead the construction. Lotte Hotel will operate the properties after construction is completed. KDB Daewoo Securities will take a leading role in funding the project.

To finance the project, the four companies will raise $50 million by making an equity investment. KDB Daewoo Securities will take the largest share in the project, securing a 39 percent stake. Daewoo International, POSCO E&C and Lotte Hotel will follow with shareholdings of 30 percent, 21 percent and 10 percent, respectively.

KDB Daewoo Securities said it will inject an additional $170 billion through project financing.

Having expanded to Vietnam in 1995 and now operating the most sites in the country among Korean contractors, POSCO E&C plans to push its business frontiers to other countries in the region, including Laos, Cambodia and Thailand, the firm said.