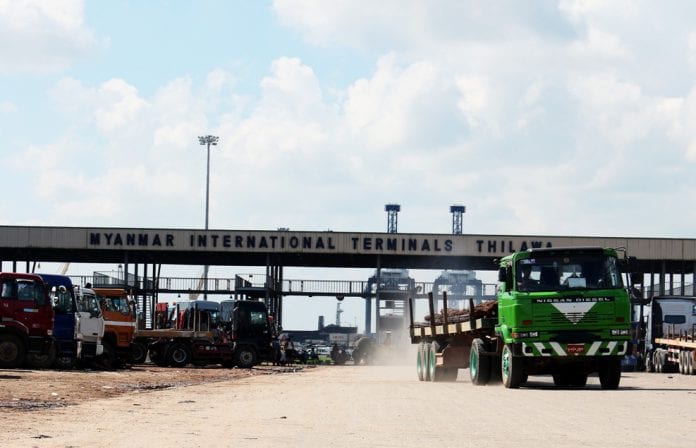 Lafarge, one of the world’s largest building materials firm with over €15 billion in revenues, and two local companies – Aung Myin Thu and My Associates – have built the factory with an estimated investment of $10-20 million, company officials said.

Lafarge owns 60 percent of the distribution depot, while the two local firms own 20 percent each.

The depot, which is near Thilawa port, 20 kilometres outside Yangon, can store 20,000 tonnes of cement and will be able to expand capacity based on customer demand, U Hla Myo, managing director of Aung Myin Thu, told Myanmar Business Today.

Lafarge has been present in Myanmar since 1999 through its local subsidiary Thilawa Cement and Building Materials Ltd (TCBM). It planned to build a factory in Thilawa earlier in 2000 but the plans were mothballed due to European Union (EU) sanctions against Myanmar. Lafarge recently opened the capital of TCBM to local partners and created the joint venture.

The new depot will mainly be used for repacking and storing cement, while the cement will be imported in bulk from Lafarge plants in the region, mainly from Malaysia and Vietnam.

The company will primarily supply its cement to construction projects in the ongoing Japanese-backed Thilawa SEZ project and the rest to the local market.

“We aim to provide good quality cement at affordable prices in Myanmar, and capture about 50 percent of the market in the future,” U Hla Myo said.

The French firm, which has 1,600 factories in 64 countries and a global workforce of 68,000, said it will hire 150 employees in Myanmar and train them to Lafarge standards, while also focusing on asset revamping, new equipment installation and reintroducing its Lafarge Star brand in the market.

Lafarge said it is planning to invest $400-500 million more in the future as it predicts Myanmar’s demand for building materials to surge.

Cement demand has been growing at a fast pace over the past couple of years in Myanmar following the opening up of the country. The subsequent construction boom has lifted the demand to 6 million tonnes in 2013, according to Lafarge.

The market can be divided in two segments, with the country’s north supplied by local cement producers and the south mainly supplied by imports from Thailand, Indonesia and Malaysia.

Local production is expected to increase at a high speed in the coming years but imports are also expected to remain important due to the high economic growth.