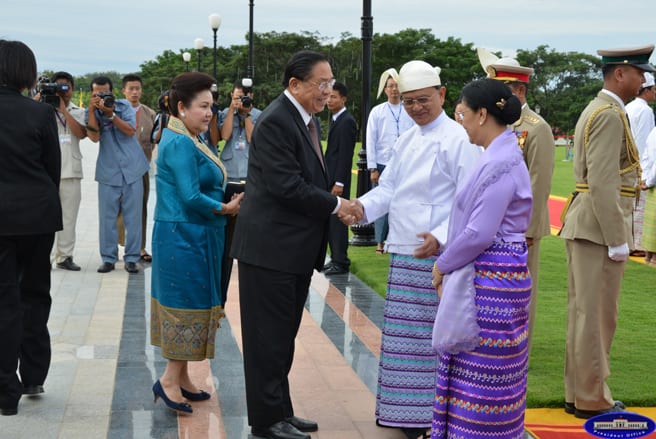 Laos has reaffirmed its support for Myanmar’s democratisation and national reconciliation efforts during a visit from its President Choummaly Sayasone to Myanmar.

During his visit, Sayasone met with his Myanmar counterpart U Thein Sein in the capital Nay Pyi Taw, where the pair discussed promoting bilateral relations as well as cooperation in the boosting of border trade, in particular in the industries of forestry, agricultural and livestock breeding. The pair also discussed rural development, poverty alleviation and education, as well as an air link between the two countries, official media reported.

The visit was Sayasone’s second to Myanmar, after he first visited the country when it was still ruled by the military junta in 2007 and follows U Thein Sein’s visit to Laos in March 2012.

The two countries have long discussed road connectivity between the neighbouring countries, and a river-crossing is currently being developed at the Mekong River Crossing Friendship Bridge, which connects Louangnamtha province of Laos and Kenluk, Techilek of Myanmar’s Shan state.

The bridge, which is 690 metres in length and 8.5 metres wide with a two-lane motorway, is about a third completed, according to reports.

Touted for completion by March 2014, the bridge aims to bring an increase in trade between the two countries that have shared diplomatic relations since 1955.