Life in a Circle: The Tyre-cutters of Yangon 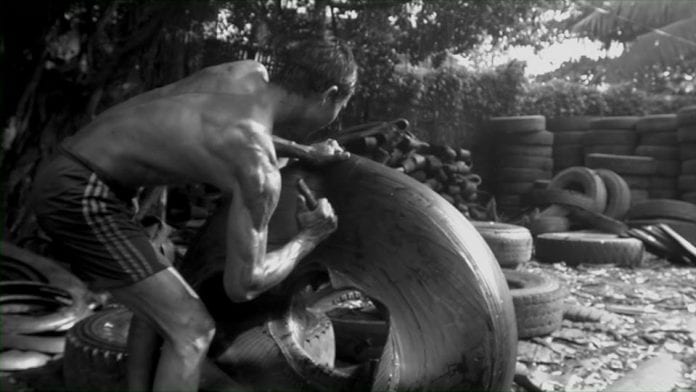 Yangon is changing quickly. As waves of foreign investment and capitalist ambitions wash over the city, glitzy bars and modern offices have begun to perforate the scrum of wooden tea shops and crumbling colonial edifices. Myanmar’s commercial epicentre is making its steep ascent toward global city status, and those of us who live here have the almost-daily privilege of seeing the city as it will never appear again.

But not all of Yangon lives up to its reputation as a dynamic emerging cosmopolis. In South Okkalapa, a remote industrial zone in the northern reaches of the city, life beats to the same predictable rhythm as it has for decades. The rhythm is produced by the neighbourhood’s community of “tyre-cutters” – people who skillfully fashion an array of useful items out of materials harvested from old tyres.

This rhythm is now captured in a short documentary called “Tyres” (2013), which was directed by Kyaw Myo Lwin and shot by Aung Ko Ko, both students at the Yangon Film School. The two were awarded Best Student Director and Best Student Cinematographer, respectively, at the Palm Springs International Shortfest in June. The festival, held annually in California, is the largest film festival for short films in the United States.

“Tyres” contains almost no dialogue. Instead, the film focuses on the repetitive movements of the hands, feet and faces of its subjects as they craft buckets, slippers and steel-wire brushes out of tyre parts. Absent any lengthy interviews, the viewer is left with images of men and women crouching in low, wooden shanties and the sounds of their labour as they hammer, scrape, strip and cut the rubber and steel from the tyres using a variety of homemade tools.

One of the cutters, Ko Naung, a 43-year-old man who has been cutting for 25 years, brings a blade perilously close to his fingers as he pontificates to his wife about how the younger generation of cutters works too quickly, leaving them exhausted and their joints damaged.

“They will tire themselves out. They need to pace themselves. I started cutting when I was in the fifth grade. There is no need to hurry,” says Ko Naung as he cuts a layer of rubber from a tyre in slow, steady strokes. “This is a job that will never make you rich.”

The layers of rubber Ko Naung extracts will be fashioned into durable slippers and water-tight buckets – equipment that rural famers need and can buy cheaply, thanks to the ingenuity of the cutters.

Later in the film, Ko Naung lounges in a corner of his shop as his son entertains him by performing some tricks with rubber bands. The father laughs and asks his son to teach him the tricks. Despite the impossibility of material wealth, there is levity and joy in the life of a tyre-cutter.

“I wanted audiences to see the work of the tyre-cutters. It is a job that not many people know about. The work is repetitive and boring, but the people are happy,” said Kyaw Myo Lwin, the film’s director.

Kyaw Myo Lwin began spending time with the tyre-cutters months before this project began. He said he wanted to understand their lives and get a feeling for what it might be like to work in the tyre-cutting profession.

“I’m a bit of a strange guy,” he joked, commenting on his unusual decision to make a film about a subject that he admits is boring. Despite the mundaneness of the topic, Kyaw Myo Lwin, Aung Ko Ko and their sound editors manage to reveal the visual and aural beauty in the life of the tyre-cutters, forcing the viewer to realise that development and investment are not the only worthy stories in Yangon today.

Another portion of the film depicts Than Oo, a 25-year-old woman who has been working in tyre shops for ten years. She hammers steel wire, extracted from the tyres and stripped of excess rubber, into a block of wood. After hundreds of short clinks of metal on metal, she is left with a new steel brush. She puts it aside and begins hammering the next one.

Another striking feature of “Tyres” is its lack of colour. It is shot almost completely in black and white. Kyaw Myo Lwin explained that when he tried to shoot scenes in colour, the bright clothing of the workers stood out against the drab, industrial backdrop of South Okkalapa. But when he tried shooting in black and white, at the urging of one of his mentors, he noticed the blackness of the tyres standing out against the grey scenery. He realised that this would be a better way to convey the film’s message.

“In black and white, you notice the tyres. The tyre is a circle. The days and lives of the cutters are also a circle,” he said.

In “Tyres,” the motif of circularity is inescapable. In another scene, U Kyi Han, a 69-year-old cutter who has been at the job for forty years, tells the story of how his blade slipped while he was cutting, ripping his fingernail right off. He then sings a song whose refrain goes, “The cycle of life is long. You don’t get what you want. You get what you don’t want.”

Yet the viewer is not left feeling sorry for these labourers. The film depicts the families of the cutters eating hearty meals of stew and rice as they share stories of the day’s work. It is also interspersed with close-ups shots of the workers’ faces, which are decorated with thanaka and expressions of confident diligence.

“I wanted the audience to look at the faces and feel I am close to you,” said Aung Ko Ko, the film’s cinematographer.

This intimate look at the lives of Yangon’s tyre-cutters comes at an opportune time. As Myanmar continues to attract aid and investment, the country’s internal infrastructure is steadily improving. Heightened road quality makes discarded tyres a rare commodity, raising the prices at which South Okkalapa’s tyre-cutters can buy them.

But development also brings higher levels of car ownership, and that may counterbalance the effects that improved roads have on the cutters’ livelihoods. The future remains uncertain, just as all of Yangon undergoes ground-shifting change. But for the time being, life in South Okkalapa continues to beat the familiar rhythm of metal on rubber, scraping, stripping, hammering, cutting.