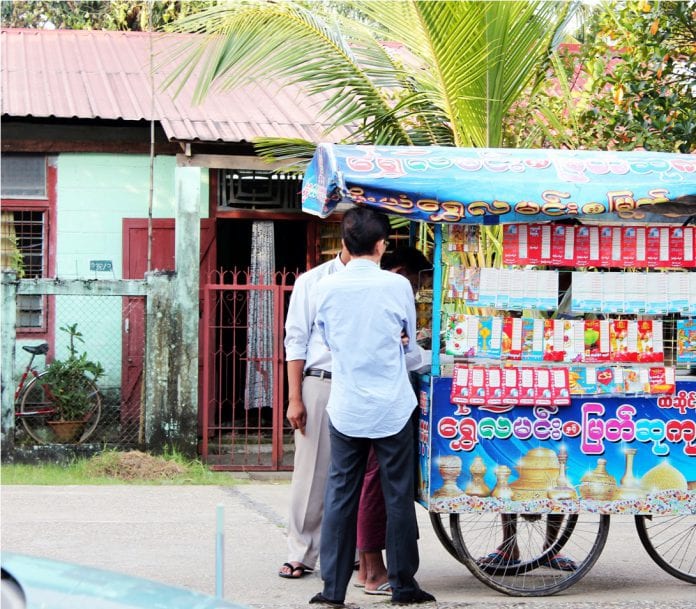 Lottery prizes worth K200 million ($200,000), including one K150 million grand prize, have not been claimed by the winners, U Thein Naing, director of the state-run Aung Bar Lay Lottery Department, said.

The deadline for claiming the prizes was November 28 and the money has been appropriated as state property.

“It is important to claim these prizes before the approved deadline. Otherwise they get transferred to the state coffers,” said U Thein Naing.

The reason why those prizes were unclaimed may be because the winners have not found out that they won or have lost their lottery tickets, he added.

Grand prizes of Aung Bar Lay lotteries are usually claimed at the department’s Yangon and Mandalay offices, while the smaller prizes are claimed at township revenue offices by the winners.

“The lottery ticket buyers assume that they would definitely be notified if they win. But this is not the case,” a sales manager from a branch of Shwe La Min & Myat Su Kadae lottery ticket chain on Pansodan street told Myanmar Business Today.

“We usually inform the winners about their winnings but are not able to do so every month. That’s what lottery result sheets are for. We mostly try to inform winners when the prize is big.

“But some change their numbers and some are really hard to reach, while some are living too far away to relay the news in person. We would like to ask the buyers to check the lottery results,” he said.

In the past, people had to scrutinise every number on the result sheets to see if they match the number of the tickets they bought. This tedious task has been transformed with the appearance of mobile apps that allow users to check winning numbers through phones.