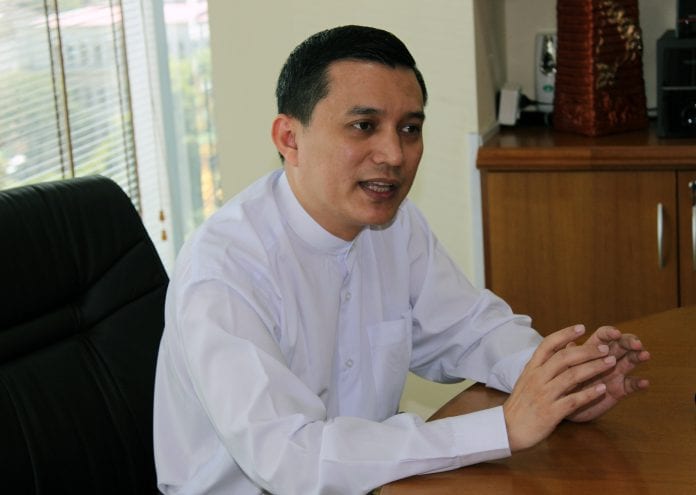 In early 2003, Myanmar’s emerging banking sector was brought to its knees when more than a dozen informal financial companies, who weren’t licensed to take deposits, collapsed. The ensuing panic among many Myanmar, who had put money into those shady companies – which some dub as Myanmar’s Ponzi schemers – rushed to withdraw their money from the private banks. The bank run brought a number of banks to the brink of insolvency and prompted a host of daft government measures that effectively killed the sector. At the time, the Economist termed the whole saga as “kyatastrophe”. Today, Myanmar’s banking industry still shows signs of the decade-old scar.

U Ye Min Oo, managing director of Asia Green Development (AGD) Bank, recounted the debacle as he began talking about Myanmar’s banking industry. He said the whole fiasco wasn’t even the banks’ fault, but essentially what happened after that is that people stopped trusting informal companies as well as banks.

U Ye Min Oo has been with AGD Bank since its inception in 2010, when the government issued four new banking licences. At that time he was managing six companies which were under AGD’s parent company Htoo Group, which is owned by tycoon U Tay Za.

However, getting a banking licence posed the group with a new problem in a country which had no functioning banking system in 2010 following the 2003 debacle. The top management were left scratching their heads as there was no one who had experience in running a bank.

“We could’ve taken in a foreigner but there’s a good chance that they wouldn’t understand the system and the traditions,” he said. The group decided to put someone from its senior management to manage the bank and since then U Ye Min Oo has been steering the new bank through Myanmar’s excruciating regulatory maze.

Not an easy task

U Ye Min Oo candidly admits that managing a bank was very new for him and he still has to go through a learning process. Things were made harder as the Central Bank of Myanmar (CBM) stacked a bunch of strict rules and regulations on banks.

He had to initiate a lot of things in a very short time to ramp up the bank’s brand awareness. “It was very difficult. We had to do a lot of marketing. We had to visit a lot of businesspeople and study a lot of businesses closely to ensure that we give quality loans and not fall into bad debt.”

Another pressing issue that U Ye Min Oo still faces is the dearth of qualified human resources. “We can get a lot of talented fresh graduates, but they don’t know anything about the banking and financial system.” AGD Bank later recruited some experienced senior people and set up a banking training school, where a lot of young people are trained by financial industry experts.

U Ye Min Oo says things move very slowly in Myanmar’s banking industry as the regulations are very tight. “We felt the industry was ‘over regulated,’” and that also stems from the scars deeply etched back in 2003.

“There are a lot of things that I cannot do,” he said, especially when it comes to investing the bank’s capital into a venture. “The government only allows us to do two things – giving loans and buying government treasury bonds. In other countries banks can invest, but here the opportunity is very limited. So, making profit is very difficult.”

Another stringent regulation that banks have to follow is that they can’t give loans to their parent companies and its subsidiaries. “In Htoo Group we have a lot of businesses who need a lot of financing. But, I have to find other businesses to give loans.”

U Ye Min Oo said the bank’s expansion is stunted by another financial regulation, which stipulates that banks must buy the whole plot of land if they want to set up a branch somewhere. “We tried to explain this to the authorities. In downtown Yangon how can you afford to buy the whole land and the building? That’s why we had to buy this whole building,” he said, referring to the 15-storey building near Sule Pagoda where his office is.

The laws are slowly relaxing, but still compared with Myanmar’s neighbouring Thai banks, which sometimes can have over 1,000 branches, the banks here have a very low degree of presence throughout the country. Recently, the CBM has given permission to the banks to open in shopping malls and on the ground floor of apartment buildings – still there’s a catch, those are not recognised as “full branches”, they are “mini branches.” Being labelled as “mini branch” comes with a lot of work despite offering the same services as a regular branch. “We have to take out all the transacted cash at the end of the day from the shopping mall branches to a ‘proper’ branch.” U Ye Min Oo said the bank will start expanding rapidly after these rules are relaxed.

AGD’s current market share, which is about 12 percent, is still not at the same level as other banking giants in Myanmar. KBZ Bank. However, AGD’s total assets increased a staggering 72 percent to K383.28 billion ($395 million) in 2012-13 from the previous fiscal year, while its total bank deposits registered an 82 percent rise to K322.5 billion ($332 million) during the same period.

U Ye Min Oo says it is comparatively easier for AGD Bank to attract people because of the well-established brand name of its parent company. “If we didn’t have Htoo Group behind us it would’ve been very difficult for me to win people’s trust.” This is also true for all the banks that got licence in 2010 as they are all backed by big companies, he said.

AGD has 29 branches countrywide with five branches in the commercial capital Yangon.

Migrant workers’ remittance is one of the key areas AGD is focussing on besides its domestic remittance services. AGD has remittance deals with Kasikorn Bank (KBank) in Thailand; Maybank, CIMB and money transfer network International Money Express (IME) in Malaysia; and with Singapore Post Ltd (SingPost) in Singapore.

U Ye Min Oo says there has been a surge in remittance inflow since AGD struck deals with those banks and financial institutions. Every month AGD gets at least $1 million in remittances, he said.
“We send our people to Thailand and also KBank sends representatives to factories where Myanmar people work, to build awareness about our remittance programme.”

AGD couldn’t come to a deal with Western Union as the US money transfer giant asked for a one-way exclusive deal with AGD – which would’ve meant AGD scrapping its deals with Maybank, IME, CIMB and KBank. However, at that point it was impractical to stop the services for Myanmar migrant workers in those countries, U Ye Min Oo said. That prompted him to seek an alternative and that was Western Union’s US rival Moneygram. In August, Moneygram tied up with AGD Bank.

AGD also joined the Myanmar Payment Union (MPU) in September 2012 and signed an agreement with China’s largest payment network China Union Pay (CUP) in February. A deal has been inked with Japan Credit Bureau (JCB) in July, and in the next two months AGD can start to accept JCB cards, he said.

U Ye Min Oo said AGD has also received the principal licence to accept MasterCard and Visa, but still ironing out a few details. “We received licence from Visa about three months ago but the problem was Visa uses JP Morgan as their settlement bank, and JP Morgan is still reluctant to do business with Myanmar banks although the US Treasury in February issued a general licence to AGD and three other local banks. “I hope by the end of this year we would be able to handle Visa cards at our ATMs.”

Things weren’t that difficult with MasterCard as it uses a different bank that agrees to do business with Myanmar banks. “Maybe within two months we can acquire MasterCard.”

U Ye Min Oo says he is satisfied with the progress made in reforming the financial industry in Myanmar. Earlier, banks had to go through complex and time-consuming bureaucratic procedures at the CBM, as it was under the Ministry of Finance. “With the new central bank law, the CBM became independent, and we got our independence too.”

U Ye Min Oo believes every financial institution in Myanmar must learn the international way of doing business and study global financial institutions. The government institutes also need to learn how other countries’ central banks regulate their industries, he said. “They should allow us things that other regulators allow.”

However, he didn’t forecast a popular launch, at least for one year, of Yangon’s much-anticipated stock exchange, slated to start in October 2015. “After one year when some big companies will be listed in the bourse, only then the public will become confident about buying shares.”

Myanmar’s banking system lacks automation and still people have to physically go to a branch to transfer money from one account to another. “We need to change the way we do banking services,” U Ye Min Oo said.

He said AGD is ready to provide mobile banking services but the CBM hasn’t yet prepared the mobile banking regulations. U Ye Min Oo claims AGD is the only bank that has started online banking to pay phone, electricity and other utility bills. However, to get that approval [for doing online banking] it took AGD one year, he said.

AGD also offers balance inquiry and cheque verifying services through phones. U Ye Min Oo said the idea of providing a cheque verifying service was driven by people’s distrust in cheques. “There are cases where a car seller and the buyer are both my clients but they don’t trust each other. They fear that the cheque will bounce. So what essentially happens is that the car buyer comes to our bank, takes the money out, gives it to the car seller, and then the seller deposits the money at our bank again.

“We changed our style and offered an online service to verify cheques, so that people are encouraged to use them.”

U Ye Min Oo said he meets a lot of software companies and developers who are willing to set up centralised core banking systems for banks in Myanmar, where all the data are stored at headquarters. “Our poor telecommunications infrastructure won’t allow it. Instead we use satellite link system,” he said.

However, in rainy season, these satellite links can cause headaches due to delays of one hour, or sometimes even a day.

U Ye Min Oo said in the near future when the whole internet infrastructure is overhauled the banks might be able to use the centralised system. Currently, AGD is using distributed core banking system, which means there are servers in every branch and they upload data every five minutes to the headquarters. However, one server costs up to $3,000, and there are also monthly and annual fees involved.

U Ye Min Oo also blamed the infrastructural bottleneck as the main reason for not expanding AGD’s ATM network. “The problem is, how do you connect them to the headquarters? In some areas we still use satellite link – that’s why you see people complaining about the ATM service.

Too many banks and future competition

Myanmar now has 25 banks, including the state-run banks, and more than 20 representative branches of international banks. U Ye Min Oo predicts intense competition once Asean Economic Community (AEC) is established in 2015.

However, U Ye Min Oo is still optimistic about Myanmar’s banking industry’s future. “I think in five years we will develop a lot but still we wouldn’t probably be able to compete with Singaporean or Thai banks.

But after 10 years, he says, “We would be able to compete internationally, although it depends a lot on our central bank.”