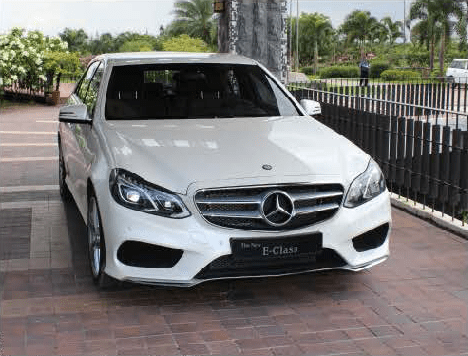 The Mercedes-Benz E-Class is a range of executive cars manu­factured by Mercedes-Benz in various engine and body configurations. The “E” initially stood for Einspritzmotor (Ger­man for fuel injection engine), a new feature in volume produc­tion vehicles at the time E-Class first appeared.

Local auto company Jardine Cycle and Carriage (JCC) Ltd, which will import the new series, is the German manufac­turer’s sole agent in Myanmar.

Mercedes-Benz launched the E-Class series at a ceremony at at Mingalardon Golf club in Yangon last week.

Both the Saloon and Estate models combine a host of comfort and safety features, all of which Mercedes-Benz refers to as “intelligent drive.” They include systems which can help prevent accidents with cross­ing vehicles, pedestrians, or oncoming traffic, and anti-glare permanent high-beam head­lamps. Mercedes-Benz said in a statement that these measures underscore its leading position as a safety pioneer.

Mercedes-Benz said it has re­vised all of the E-Class models to make the latest technical ad­vances available such as use of developments from the future S-Class. “The new E-Class also makes a significant step forward when it comes to efficiency and ecology,” the automaker said in a statement.

The E-Class is available with two different front ends: the standard specification and the “elegance” equipment line come as standard with the clas­sic, three-dimensional saloon radiator with three-louvre look and Mercedes-Benz star on the bonnet. The “avantgarde” equipment line, on the other hand, incorporates the sporty front end with central star.

The headlamps have been re­designed and comprise all func­tional elements with a single headlamp lens. Flowing light elements within the headlamps retains a typical E-Class “four-eyed” look. Both the low-beam headlamps and the daytime running lamps feature LED technology. The bonnet and front bumper have also been redesigned by the automaker.

The interior of the E-Class has been reworked and harmonised with its exterior. A new feature is the two-part trim which stretches across the entire dashboard. It can be selected in a wood or aluminium look, irre­spective of the equipment line. Also new is the design of the air vents as well as an analogue clock between the two central vents.

The new E-Class offers a variety of individualisation op­tions, currently unique in this class. Irrespective of the chosen equipment line, all appoint­ment options remain available. As such each vehicle can be individually tailored to ensure that it is unlike any other.

In the E-Class, various new or optimised systems from the fu­ture S-Class have been featured. The basis for all this is formed by new, state-of-the-art sensors and corresponding algorithms.

Mercedes-Benz introduced the stereo multipurpose cam­era, which is positioned behind the windscreen in the vicinity of the rear-view mirror. However, this camera features two “eyes” set at an angle of 45 degrees and with an overall range of 500 metres that produce a three-dimensional view of the area up to around 50 metres in front of the vehicle.

The stereo camera provides data for processing by various systems. Intelligent algorithms perform an evaluation of this three-dimensional visual information in order to detect and carry out a classification of vehicles that are driving ahead, oncoming or crossing, as well as pedestrians and a variety of traffic signs.

Mercedes-Benz also intro­duced improved versions of the multistage radar sensor system. Both the Saloon and Estate models are fitted with “collision prevention assist,” a radar-based collision warning system with brake assist systems, which helps reduce the risk of a rear-end collision.

Also forming part of the standard equipment is “atten­tion assist,” which warns of inattentiveness and drowsiness across a wider speed range, and also inform the driver about their level of fatigue and the amount of driving time which has elapsed since the last break.

In addition, also optionally available are a number of assis­tance systems which are either new or now feature significantly extended functions. The “dis­tronic plus” with “steer control” can help take the burden off the driver when it comes to keep­ing the vehicle in its lane and also track traffic in tailbacks semi-automatically.

The brake assist system BAS Plus with junction assist is able to detect crossing traffic and pedestrians too, and boost the braking power applied by the driver accordingly.

The “pre-safe brake” can detect pedestrians and initiate autonomous braking to avoid a collision at speeds up to 50 kilometres per hour. “Pre-safe Plus” can recognise an im­minent rear-end collision. The driver of the vehicle following behind is warned by activation of the rear warning lights with increasing frequency (not in the USA and Canada). The system then triggers occupant protection measures to reduce the forces to which occupants are subjected. It can also firmly apply the stationary vehicle’s brakes in the event of a rear-end collision to prevent secondary accidents.

Active lane keeping assist can detect when the adjacent lane is occupied, in particular by oncoming traffic too. When there is the risk of a collision, the system can also prevent the vehicle from leaving its lane un­intentionally, when continuous lines are present, by applying the brakes on one side. Active parking assist enables automat­ed parking with active steering and brake control in both paral­lel and end-on spaces.