HomeMMBIZ NewsMiddle Class in Myanmar to Double by 2020
MMBIZ News

Middle Class in Myanmar to Double by 2020 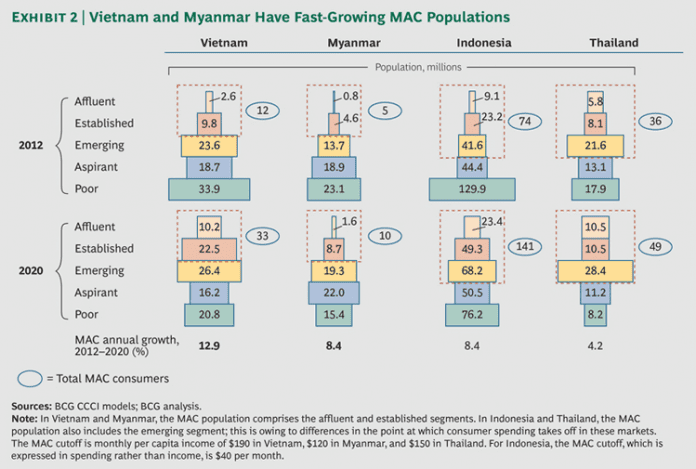 The middle and affluent class in Myanmar will double in size by 2020 given the recent economic reform process sustains its momentum, according to a research by American consultancy firm Boston Consulting Group (BCG).

Myanmar’s middle and affluent class will grow to about 15 percent of the population by 2020, BCG said in its report titled “Vietnam and Myanmar: Southeast Asia’s New Growth Frontiers”.

BCG defined the middle and affluent class as those with a monthly per capita income of more than $120. About 5.3 million people out of Myanmar’s 60 million currently falls under this category, and BCG predicts the figure to rise to 10.3 million.

Consumers in Myanmar are also among the most optimistic in the world – even more optimistic than China, India, Indonesia and other fast-growing emerging markets.

More than 90 percent of all consumers in Myanmar in the survey said their children will lead a better life than themselves. Consumers sharing that belief are more than 20 percentage points lower in China, India and Indonesia.

However, more than 80 percent of urban consumers are still financially insecure, the report said.

“Companies that invest in Myanmar now have an opportunity to build businesses, brands and momentum early in the development of these formerly closed economies – but only if they have a solid understanding of the market’s consumers and how to satisfy them,” Douglas Jackson, a BCG partner based in Ho Chi Minh City and co-author of the report, said.

The report showed that Myanmar’s emergence from economic isolation is more recent and provides a rare opening for companies to reach a small, undeveloped but rapidly growing market.

“If Vietnam is a here-and-now opportunity, Myanmar is a more long-term play. The market is still developing, so there is time to learn and be focused in your strategy,” said Tuomas Rinne, a BCG partner and another co-author of the study.

BCG said two-thirds of Myanmar’s middle and affluent class population live in urban areas, with half living in Yangon, Mandalay and Ayeyarwady regions.

Only about one-quarter of consumers go on vacation and fewer than four out of 10 frequent restaurants. Consumers in Myanmar frequently buy entertainment products, however, especially VCRs, before they buy consumer durables.

It added Myanmar consumers continue to rely predominantly on traditional rather than modern formats for shopping – 19 percent of consumers use supermarkets regularly.

The uncertainty of electrical service discourages the use of expensive appliances, and the lack of movie theatres and other entertainment venues encourages at-home options. About 53 percent of urban consumers own a mobile phone but only 18 percent own a washing machine.

The report grew out of a desire to understand middle and affluent consumers in Myanmar and help companies win them over. BCG’s Centre for Consumer and Customer Insight (CCCI) conducted primary research in Myanmar and also Vietnam.

To project the growth of consumers and their spending, the CCCI analysed population and income trends in about 75 areas in Myanmar. It also surveyed 1,000 urban consumers in Myanmar about their purchases in 20 categories of consumer goods.

As a result of growing income levels, the number of poor in Myanmar will drop from 23.1 percent to 15.4 percent by 2020, the survey found. Also, 27 percent of the population had increased discretionary spending over the past year, the report said.

With a population twice that of the United States and GDP growth greater than five percent, Southeast Asia is a large and dynamic region. BCG said, by 2015, the ASEAN Economic Community (AEC) free-trade pact will further energise the region.

Interest in Myanmar is more recent. Unilever and Coca-Cola have both recently opened local manufacturing facilities and are committed to making further investments. A joint venture between the Myanmar and Thai governments is developing a deep-water port in Dawei, on Myanmar’s Southeastern coast. A new road through mountains and jungles will eventually connect a surrounding industrial zone of more than 200 square kilometers with Bangkok, 350 kilometres away.