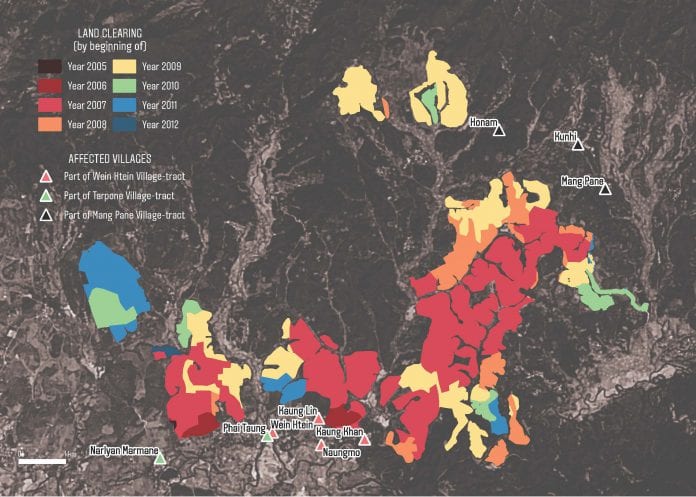 Myanmar’s military, business and political actors have been involved in mass confiscations of ethnic minority land in northeastern Myanmar, near the border with China, a UK-based rights group said.

By 2013, 5.3 million acres of land – 35 times the size of Yangon – had been leased to investors for commercial agriculture, Global Witness said in a report last week. Driven by rising demand from China, more than a quarter of this total is now covered by rubber plantations, the report said, adding that this is having a dire impact in a country where 70 percent of people rely on farmland and forests.

The result of an eighteen-month investigation, “Guns, Cronies and Crops” details the collusion and cronyism at the heart of a number of operations carried out by Myanmar’s armed forces, the Tatmadaw, in which large swathes of land were taken from farming communities in the mid-2000s and handed to companies and political associates to develop rubber plantations.

The damning report alleged that the current Minister for Agriculture and Irrigation, U Myint Hlaing, the country’s ruling Union Solidarity and Development Party, and Sein Wut Hmon, a rubber company, colluded with the military junta to gain control of land.

These revelations come as Myanmar’s government finalises the drafting of a national land policy, the country’s first.

The report documents the legacy of these land grabs on an already marginalised ethnic-minority population for whom little has changed since the country’s much-lauded transition to civil democracy in 2011.

“But in many cases the army has merely swapped its uniforms for suits, with military officials and their cronies retaining firm control of the country’s land sector. As foreign agribusinesses are now poised to invest in Myanmar after decades of trade sanctions, their money risks fuelling human rights violations and playing into the hands of the former dictatorship.”

Most of the land confiscations investigated by Global Witness took place in 2006 when, under the veneer of the nationwide ‘Privatisation Programme’, Generals were transferring public assets and natural resources into private ownership, reportedly to ensure that they and their associates retained economic control post-transition.

“What we’ve seen in Myanmar’s land sector is a transition from military rule to a form of gangster capitalism, with elites able to grab land with total impunity,” said Cohen.

“Myanmar’s new land policy and subsequent land law present a major opportunity to secure a more equitable future for the country’s citizens. International donors must use their leverage with the Myanmar government to ensure that new legislation puts an end to the land grabs that are blighting the country’s reform effort. But true reform must also redress the problems of the past. The government and its cronies must be held to account for the abuses of the previous era and ensure that impacted communities receive restitution.”

Global Witness said it wrote to Sein Wut Hmon’s owner and director, U Maung Myint, in February asking for comment. In his response, U Maung Myint dismissed information given to Global Witness as hearsay, denied that the company had used military connections to acquire villagers’ land and insisted that it had consulted with local people and provided jobs and development. Global Witness said it had also attempted to contact the Minister of Agriculture and Irrigation, U Myint Hlaing, and all other groups and individuals named in the report, but none of them responded.