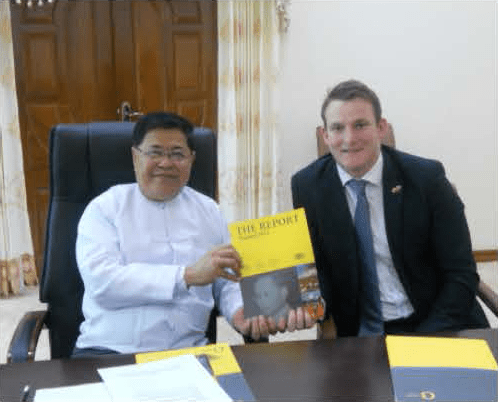 U Soe Thane, minister of the President’s Office and former chairman of Myanmar Investment Commission (MIC), said Myanmar’s current reforms are “irreversible” and that the foreign investments are safe in the recently-opened Southeast Asian nation.

Concerns from foreign investors were discussed in a meeting held during research for an upcoming report to be published by the UK-based publishing, research and consultancy firm Oxford Business Group (OBG).

“Sanctions are not entirely under Myanmar’s control, but what we guarantee is that the comprehensive reform initiatives undertaken to achieve democratisation and equitable development for Myanmar are irreversible,” U Soe Thane said. “Myanmar will continue to push ahead with its reforms and is working hard to ensure that the fruits of our current initiatives will be enjoyed by all of our citizens,” he added.

The minister told OBG: “The new foreign investment law offers guarantees against the nationalisation and termination of investment during the permitted term. It also allows for transfer of the entitled foreign capital to the investor on the expiry of the term of the contract.”

The Report: Myanmar 2014 will be produced with research assistance from the Myanmar Investment Commission (MIC) and PWC.

OBG’s editorial manager, Michael Nesbitt, said, “The entrance of global players such as Coca-Cola, Unilever as well as many smaller more versatile firms shows that investor confidence is on the rise. Although infrastructure bottlenecks and real estate prices are still a deterrent, the modernisation of the banking sector, opening up of the telecoms industry and the liberalisation of the insurance sector are all expected to play a vital role in the evolution of the economy”