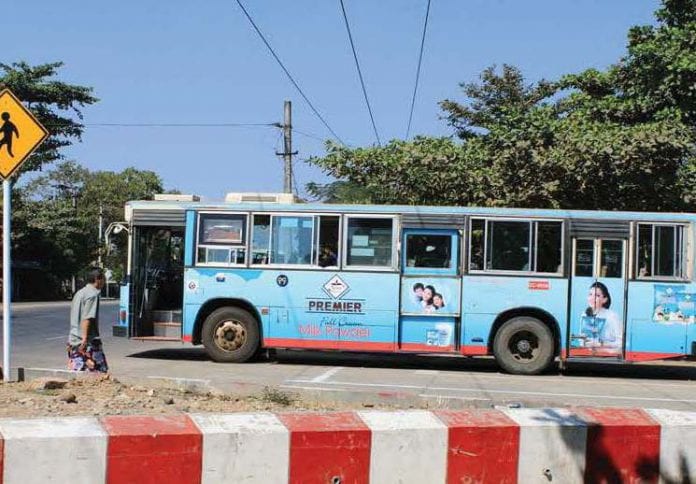 After the establishment of a public bus company, new standard of buses in line with international norms will be introduced to ensure convenience of commuters, Dr Maung Aung, an advisor to the Ministry of Commerce, told Myanmar Business today.

After the structural reform has been implemented, bus owners will either provide their own buses, or purchase one from a collective fund. The new public company will only use buses that meet criteria such as working air conditioning systems, reliable safety and mechanical systems, and having a steering wheel on the left hand side.

The government has allotted K10 billion ($10 million) investment for the new public bus company, in which 40 percent of the profits will go to the government and 60 percent to the private investors.

“We are currently drafting an organisational constitution, which will be shown to the public in a workshop at a future date. Shares will be offered for sale as it is a public company, although the price has not yet been decided,” Dr Maung Aung said.

When the public company starts operation on its bus lines it will coordinate with individually-run bus lines so that those lines do not suffer losses in the short term. Eventually, all bus lines in the city will join the system.

Drivers and conductors will earn fixed wages and receive benefits such as accident insurance under the new system.

“In neighbouring countries, public bus lines have been established for a long time. It ensures a more comfortable public transport experience, prevents competition between bus lines and promotes adherence to traffic rules,” said a senior official from the Yangon City Development Committee (YCDC).

The plan to establish the public company is expected to face heavy opposition as many bus owners are reluctant to participate.

“I don’t know exactly how the system will function, but I am willing to cooperate if it is more beneficial for the public. The authorities need to explain the plan in greater detail to the bus owners and convince us to cooperate,” said one bus line operator who wishes to remain unnamed.

There are over 7 million in Yangon region, of whom 2 million rely on public transport on a daily basis, and 85 percent of those use the bus system.

Under the current bus system, the drivers and conductors keep the collected bus fares, after paying a fee to the owner of the bus. Buses compete with each other for fares, and often break traffic rules to make as many runs and get as many passengers as possible.

The complaints from passengers have been rising, and the number of complaints surpassed 1,400 in 2014, up from 400 in 2013. Most complaints revolve around overcharging and rude behaviour by conductors.

Currently, over 350 bus lines are running on 17 routes in Yangon region, with over 6,500 vehicles, according to official statistics.