Ministry of Communications to Co-host Telecoms Conference in September 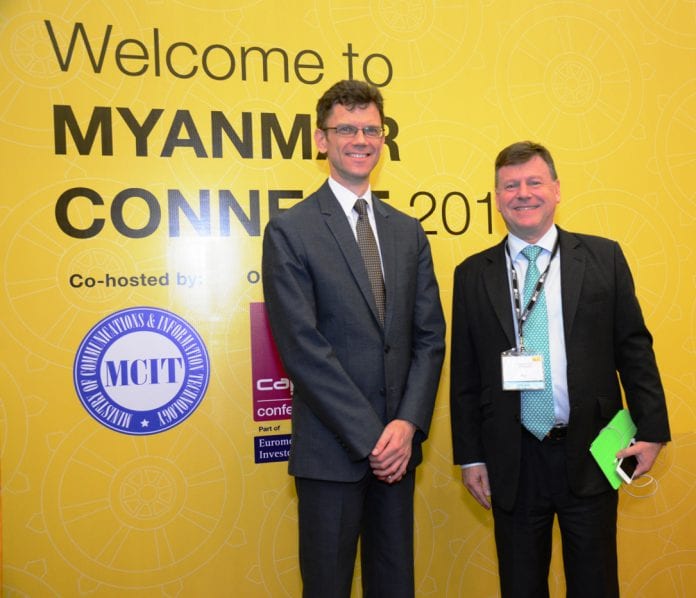 The 2nd annual Myanmar Connect conference, an executive summit to tie Myanmar with the international telecoms market, is to be co-hosted by the Ministry of Communications and Information Technology for the second year running, the organiser said.

The partnership means that senior ministry representatives will outline their vision for the future of communications and IT in Myanmar at the summit, it added.

Capacity Media said Myanmar Connect 2014 will build on 2013’s platform and examine how much the operating environment has changed over the last year.

As the international mobile licence winners, Ooredoo and Telenor, near their launch dates the infrastructure builds across Myanmar have reached a fever pitch.

Ross Cormack, CEO of Ooredoo Myanmar, and Petter Furberg, CEO of Telenor Myanmar, will both outline their strategies and targets for the year ahead at the conference, the organiser said.

These will be joined by a senior representative from Myanmar’s incumbent operator, Myanmar Posts and Telecommunications (MPT), and the CEO of Yatarnapon Teleport Public Company, Shane Thu Aung.

The terrestrial developments in Myanmar, alongside the entry of many multinationals into the market have put a lot of pressure on Myanmar’s international providers, and the need for more capacity is set to increase.

Executives from the international carrier marketplace active in Myanmar will also share their view of the markets trajectory and unveil plans for increased terrestrial and subsea connectivity.

Until now financial services in Myanmar have been critically underdeveloped. The proliferation of devices in the market throws the doors wide to banks, operators and IT entrepreneurs as they launch mobile money and payment applications.

U Thein Oo, chairman of the Myanmar ICT Development Corporation and IT veteran, will deliver a presentation on the impact of ICT advancement on Myanmar’s enterprise market.

Myanmar Connect 2014 will close with a plenary panel highlighting the needs of Myanmar’s consumers and will delve into the applications most relevant to them such as mAgriculture, mHealth and mEducation.

New for 2014, Capacity Media will add the Start-up Showcase during which some of Myanmar’s home-grown IT innovators and entrepreneurs will showcase their applications and ideas to delegates.