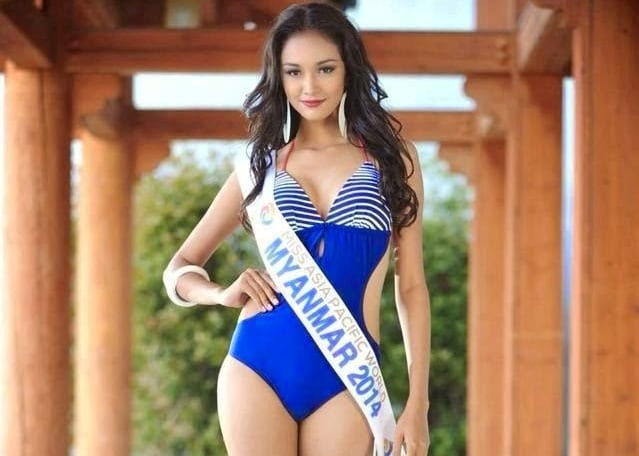 Myanmar’s first beauty queen to win an international beauty pageant, That Htet Aung (May Myat Noe), was stripped off her title of Miss Asia Pacific World 2014 that she won in May.

The organisers of Asia Pacific World beauty contest said in a statement that May Myat Noe “will be no longer” the winner, and that “she has never been qualified enough by her attitude to be the winner of such a big pageant.”

“To choose a winner, personality, integrity, loyalty to the organization, and lovely character is the most important,” the statement from the President of Miss Asia Pacific World Super Talent Organization said.

“[sic] She lied and never had respect of main organization, National Director, manager, media, fans who made her the winner,” it added.

The organisation said it was “shocked” with her mother’s illegal attempt to get three-month visa although “we issued letter of invitation and reference letter for her mother until August 29.”

The pageant organisers went on to say that there are few other issues that “we do not want to mention … in details.”

“Simply, we have no trust on her and there no reason to believe that she can carry out her duties as Miss Asia Pacific World 2014 successfully,” the statement read.

The organisers said it doesn’t want to take any risk that can affect the organisation “unnecessarily,” adding that it has bought the tickets to send her back home.

“[sic] Her ungrateful attitude and trustworthiness is one of the main reasons which contribute a lot for the decision with our worldwide national directors and lawyers which we have made sadly.”

As the oragnisation dethroned the eighteen-year-old beauty queen, she has to surrender her title, crown and sash back to the organisation’s national director Hla Nu Tun when she arrives in Myanmar.

The organisation might choose a new winner who “qualifies beauty standards, professional standards, personal qualities, who has beauty and right attitude,” according to the statement.

According to an Associated Press report, David Kim, director of media for the Seoul-based pageant, said May Myat Noe has absconded with the $100,000 bejewelled tiara and $10,000 breast implants, paid for by the pageant's sponsors.