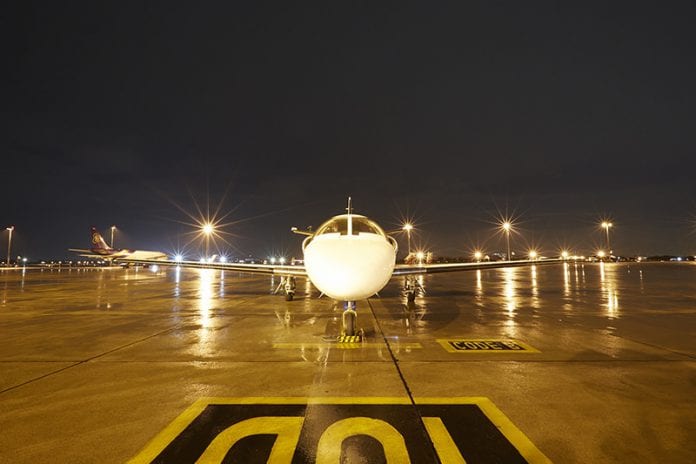 The centre addresses the country’s lack of dedicated international standard facilities and services to properly cater to discerning high net worth individuals who travel on corporate jets through Myanmar, the firms said.

“There have been many wealthy and discerning aircraft owners requesting VIP treatment at Myanmar airports that we could not provide because the necessary facilities did not exist,” said Wah Wah founder and chief executive Ohn Myint.

The MMBAC will not only fill the gap but also elevate Myanmar’s aviation industry into the “next chapter of development and modernisation,” he said.

MJets executive chairman Jaiyavat Navaraj said MJets has brought its combined “wealth of experiences, world-class professionalism and support” garnered since its inception in 2007 to bear fruit with the opening of the MMBAC.

“MMBAC will share similar high-standard of service quality as rendered at MJets FBO in Bangkok at Don Mueang International Airport,” he said.

The two-storey MMBAC also provides direct access to the 32,000 sqft hangar owned by Myanma Airways, available to MMBAC users to keep their aircraft.

There is dedicated on-site customs and immigration clearance, including a security screening check point with built-in baggage X-ray machine. A car park for 100 vehicles is available adjacent to exclusive access to the MMBAC.

Part of the ground handling activities including ramp service will be provided by Myanma Airways under an operational support agreement with Myanmar MJets.

Private jet movements through Myanmar, mostly via Yangon, are expected to grow strongly due the opening up of the country for a new face of national development in over half a century with foreign investment, business and tourism flows surging.

“When I entered the ground handling business for private jets in Myanmar 16 years ago, there was only one aircraft a year, rising to five in the second year and 15 in the third year. This year we will have 300 flights,” said Ohn Myint about the trend.

The outlook is for the private jet flights passing through Myanmar, especially Yangon, to double to 600 flights in the third year of MMBAC’s operation, and we are well positioned to accommodate the demand, added Jaiyavat.

Ohn Myint estimated that about 10 percent of the total traffic will be for air ambulance – mostly patients from Myanmar seeking medical treatment in neighbouring countries like Thailand and Singapore.

Myanma Airways has expressed a keen interest to elevate its operation partnership with Myanmar MJets to a stakeholder.

“It is our intention to become a joint venture partner with Myanmar MJets because of the merits of the project, and that will be the next step once our operation partnership works out well for a while, subject to (Myanmar) government approval,” Myanma Airways managing director Than Tun said.

However, he indicated that the possible joint venture would follow the Myanmar Investment Commission’s guidelines which allow for a 51 percent ownership in the venture, leaving the remaining 49 percent to Myanmar MJets.

MJets and Wah Wah said in the future the firms will introduce private jet terminal and FBO facilities to other major cities in Myanmar such as Mandalay, Bagan and Nay Pyi Taw where demand is expected to grow as well.

“Let’s see our first venture in Yangon up and running well first before moving on to those possibilities,” Ohn Myint said.

For MJets Ltd, Myanmar MJets marks the beginning of its overseas foray as it seeks to become a regional player in the business aviation sector.

“There are potential locations in Asia on our radar screen where we want to establish a presence in the near future,” MJets executive chairman stated.

Bangkok-based MJets Ltd started operations in 2007 as the corporate flight department serving its for two shareholders – William Heinecke, the founder of Minor International Plc, and Kirit Shah, the entrepreneur of Precious Shipping Plc.