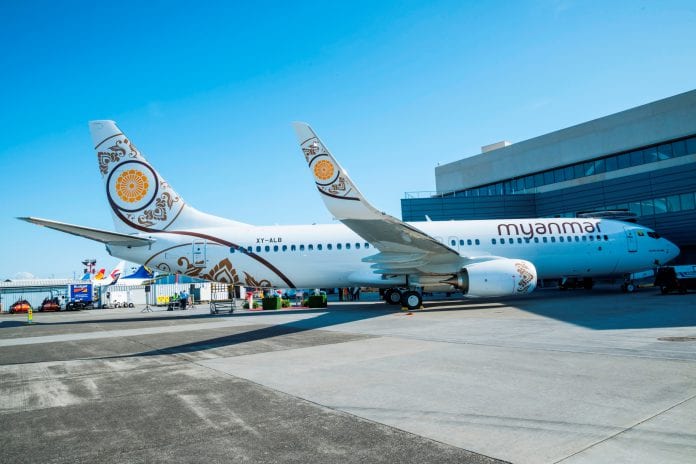 Myanmar National Airlines (MNA), the country’s flag carrier, has received its first Boeing 737-800, part of the delivery of ten commercial aircrafts which MNA ordered in a multi-million dollar deal last year to re-invigorate its brand.

The new fleet will link MNA’s 26 domestic destinations with an expanded international network starting with the launch of its first international (Yangon-Singapore) route this August and growing to four more cities in the Asia Pacific region by early 2016, MNA said.

The 737-800 was leased from GE Capital Aviation Services (GECAS), the commercial aircraft leasing arm of GE.

The delivery comes six months after MNA became the first government operation to corporatise itself in a bid to revive the struggling carrier.

“Our new 737 will allow us to expand our network to international markets and offer a better experience for our passengers,” said MNA CEO U Than Tun.

According to MNA, the new aircraft will pay off for both the airline and the country through increased jobs and boosting tourism and investment.

“These new aircraft will give more people the opportunity to discover our country by providing seamless journeys to our 26 domestic destinations – the most of any airline in the country,” U Than Tun said.

“They will also attract business and investment to Myanmar’s growing economy as we welcome the world to Myanmar through a growing network of international destinations, starting with Singapore.”

Dr Dinesh Keskar, senior vice president of Asia Pacific and India Sales, Boeing Commercial Airplanes, “A new, fuel efficient airplane such as the next-generation 737 will provide Myanmar National Airlines with the market-leading efficiency, reliability and passenger comfort, it needs to continue to prosper and grow in the region.”

The 737-800 is the best-selling version of the Boeing’s 737 family, one the most technologically advanced airplanes in the single-aisle market.

MNA was founded in 1948 under the name Union of Burma Airways. Domestic flights initially flew to 19 airports with six De Havilland Dove aircrafts, and routes to Bangkok, Calcutta and Chittagong opened up in 1950. In 1989, the airline was renamed Myanma Airways.

In addition to the aircraft, MNA will also be rolling out its new brand across its fleet, launching new services. The airline has recently installed a computerised management system for reservations and departure control processes as well as a new website providing electronic booking, payment, and seat selection.