Mobile Monday Pokes at the State of Social Media in Myanmar 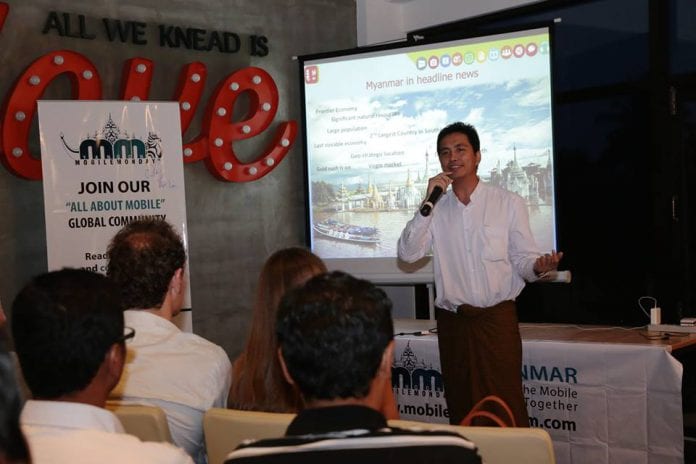 Since reform process taken in Myanmar, both print and social media actively grabbed attention of the public as they look for reliable sources of news.

Michael Pan of Internews said, “Over the years of transformation, both print and new media had become the hub of knowledge feeders for the public.

“However, the woeful side of the social media has been seen in the country and it is something to take studies to further brace the democratisation of the country.”

Fast-Moving Consumer Goods (FMCG) companies topped the traffic of Facebook in Myanmar with 65 to 75 percent positive impact from their consumers over the year, while local startups improved their online presence by 80 percent, said Stephen Kyaw, CEO of Blink Public Relations Agency.

Tech entrepreneur and Chairman of Mobile Monday U Htoo Myint Naung said Mobile Monday is so far featuring experts and enthusiasts in order to explore a theme or topic that empowers mobile industry and its boundary.

He said it’s a good time for local startups to take advantage of the rise in Facebook usage.

“The government had developed relationship with Facebook office recently to have further technical support,” he added.

The organisers will feature an e-commerce and mobile commerce line-up with 2C2P, ZawGyi Mart and Kaymu (Rocket Internet) in its next edition of Mobile Monday at the Union Business Centre on July 28.