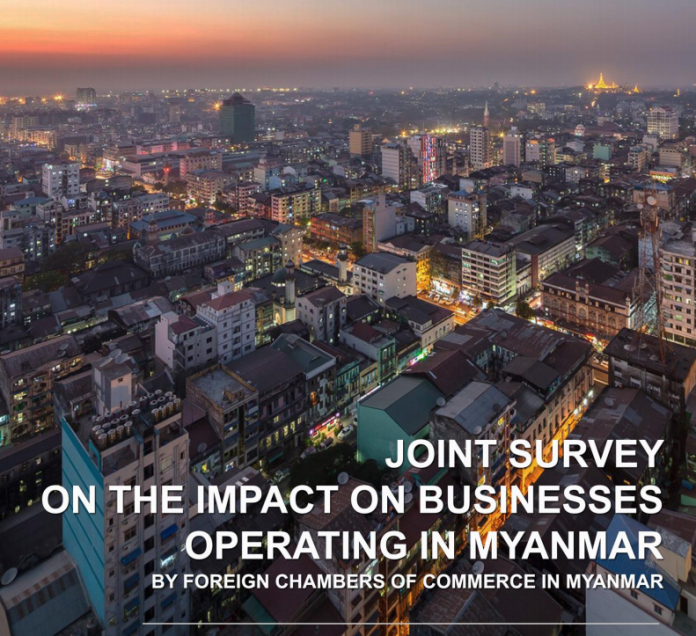 A total of 372 companies have participated in the survey called “Joint Survey on the Impact on Businesses Operating in Myanmar’ until its closure on 9th April 2021.

“The answers provided by companies show that the impact of the events of 2021 had a stronger negative impact on companies after only two months than a whole year of pandemic. Many companies have recorded no income at all during the last two months and some of them already had to completely terminate their operations in a larger proportion than in 2020,” said the survey.

On February 1, the Myanmar military seized power arresting political leaders and activists and canceling the result of the 2020 election, which the military accused to be a fraud. In response to the coup, hundreds of thousands of people come up to the street protesting the military, and a nationwide civil disobedience movement-CDM emerged causing government mechanisms to almost come to a halt.

The political situation in the country has severely impacted the income of the company with many of the companies in the survey recording no income at all during the last two months providing them no choice but to increase the measures implemented to overcome the challenges they have been facing.

“In the absence of any improvement by the end of September 2021, it is possible to foresee that the number of companies which will terminate all operations, terminate employment contracts, or reduce operations and salaries my actually double, in the worst-case scenario, by the end of the year,” the survey pointed out.

The World Bank forecasts Myanmar’s GDP to contract 10% in 2021, a reversal of previously positive trends.