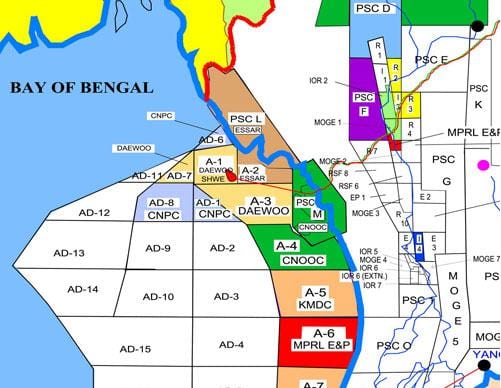 Myanmar Petroleum Exploration & Production Co Ltd (MPEP), a member company of MPRL E&P Group of Companies, announced that it has signed two production sharing contracts (PSCs) for offshore blocks A-4 and A-7 with the government.

MPEP will participate in the consortium as a local partner for the offshore blocks, which were awarded during the 2013 Myanmar offshore bidding round.

U Moe Myint, chief executive officer of MPRL E&P Group of Companies, said, “MPEP looks forward to the commencement of work programs in these blocks and also the establishment of knowledge transfer opportunities for our national staff to further enhance their capabilities concerning offshore exploration.”

Block A-4 is located in water depths ranging 50-2,100 metres and is adjacent to the Ramree and Cheduba islands.

Block A-7 is located in water depths ranging 50-2,400 metres and is located immediately to the south of block A-6 where MPRL E&P made the first gas discovery in the southern Rakhine coastal region.

In November 2013, MPEP was involved in the awarding of two blocks, RSF-5 and PSC-K, by partnering with Italy’s ENI. MPRL E&P and MPEP were also successful in being awarded onshore blocks IOR-4 and IOR-6 during the 2013 onshore bidding round.