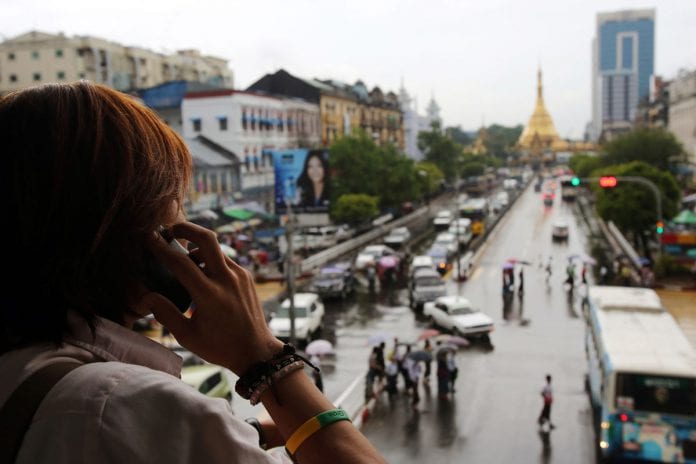 Mobile users blasted the new “discounted” rates as they are still higher than those of the foreign operators – Qatar’s Ooredoo and Norway’s Telenor. Both international firms started rolling out their networks in the second half of last year.

In the new package MPT cut its rates to K35 for voice calls from K50, K15 per SMS from K25 and switched to data-based pricing from its time-based pricing for its internet service.

“All users of MPT, GSM and WCDMA SIMs can now subscribe to Swe Thahar package for free by sending a text ‘SWE’ to 1332. The users can also add three numbers to which they can call with K25 per minute for 30 days,” Takashi Nagashima, CEO of KDDI Summit Global Myanmar, told a press briefing.

However, many users expressed dissatisfaction over the newly announced rates because they are not as low as the other two players in Myanmar’s nascent telecoms industry. Ooredoo’s rates are K25 per minute for voice calls and K15 per minute for messages, while Telenor offers similar rates. However, rates can vary depending on special packages for both the operators.

“I’m surprised that MPT can’t set the same rate as the foreign operators even though they have the advantage of having a nationwide coverage and more established infrastructure. Actually, the rate should be the same if not lower,” an MPT user told Myanmar Business Today.

Ko Htet Aung, an office employee from South Dagon township in Yangon, said: “The new rates are still very high. I think MPT is being inflexible because they have the largest market share.

“Even though I started using Telenor I was holding on to my old MPT SIM card as MPT said it will cut rates. I would’ve liked to use MPT had it offered favourable rates, but now I’ll continue using my Telenor.”

Another MPT user Kyaw Myat Zan, who switched to the new package, said: “I’ve put in K10,000 after subscribing to the package. I’ve browsed facebook for a while and now I have only K4,000 left. I told my colleagues not to ever subscribe to Swe Thahar.” However, he admitted the new package had far better internet speed than the traditional package.

U Khin Maung Tun, general manager of MPT, defended the new pricing saying that the carrier has decreased the calling rate to only K35 because it “wants the nascent market to be stable.”