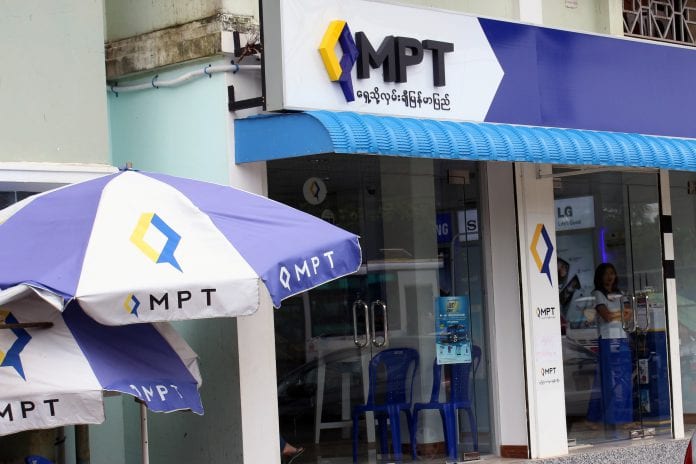 Myanma Posts and Telecommunications (MPT) announced that it has lowered voice tariff for its Swe Thahar plan and CDMA 450/800 to K23 per minute, in a move to stay competitive with the foreign telecoms operators in the country.

The new pricing went into effect on July 8, down from the previous tariff plan of K35 per minute, and K50 per minute for CDMA 450/800 users.

However, the base tariff for GSM/WCDMA remains the same at K50 per minute, according to MPT.

State-backed MPT had a monopoly over the market even until August last year. The two new foreign entrants have forced it to modernise its operations and provide competitive prices.

“With these new tariffs, we want to thank each and every one of our current users,” U Khin Maung Tun, general manager of MPT, said in a statement.

“We are sure many more individual customers and businesses will join us to enjoy many more voice calls throughout the country thanks to MPT’s most reliable mobile network and the largest reach in Myanmar, across urban and rural areas,” said Takashi Nagashima, CEO of MPT-KDDI-Sumitomo Joint Operations.

For GSM/WCDMA customers to subscribe, they need to send “SWE” by SMS to 1332. Prices of other services included in the Swe Thahar plan and CDMA will remain the same.

“This [price reduction] is good news. I used to use Swe Thahar for internet and used Ooredoo to make calls because it was cheaper than MPT. MPT has better coverage than Ooredoo or Telenor around the country. So, even if it is K23 [cheaper than Telenor but pricier than Ooredoo], I’ll start using MPT for calls again,” Ma Hla Myo Maw, an IT instructor from Kamaryut township, told Myanmar Business Today.

In July last year, MPT signed a partnership with Japanese conglomerates KDDI Corp and Sumitomo Corp in a move to prop up its dilapidated network using advanced technologies. Together, KDDI and Sumitomo have committed to invest over $2 billion to expand MPT’s network around the country.