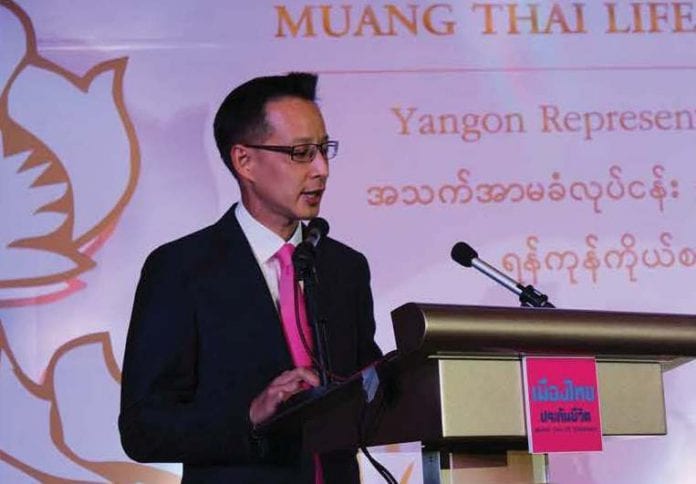 Even though the insurance industry remains off limits to foreign companies, Muang Thai Life Assurance is the latest foreign insurance company to open a representative office in Myanmar with the hopes of cashing in on the mostly untapped market.

“By having a representative office we are committed and ready to share our experience with the providers in Myanmar. Right now there are quite a number of companies in Myanmar that have a licence and of course we want to share in the market potential,” said Sara in an exclusive interview with Myanmar Business Today.

According to the company, Thai Muang Life Assurance the representative office will, “Act as a center in providing cooperation, information sharing, supported in spreading knowledge regarding the value and benefits of having insurance and strategy for the various services to be provided to the general public, operators and government agencies.”

In early 2013, the Myanmar government issued 12 private insurance licences to Myanmar companies, which are allowed to provide life, comprehensive motor, fire, cash-in-safe, cash-in-transit, and fidelity insurance. State-run Myanma Insurance offers 46 different classes of insurance. According to KPMG Myanmar, Myanmar is also host to 10 local insurance brokers and approximately 600 insurance agents that have been trained by Myanma Insurance. Even the industry has been minimally liberalised it still has a long way to go in order to meet potential demand.

Despite restrictions that keep foreign firms from fully entering the insurance industry, foreign-owned companies continue to remain interested in Myanmar’s underdeveloped market. The Myanmar government once hinted the insurance industry could be liberalized as soon as 2015. However, pushback from domestic insurance firms has brought this timeframe into question.

However, in the face of objection from domestic firms, the Myanmar government should considering allowing foreign insurance firms to operate in the country sooner, rather than later.

Domestic firms lack the capacity to properly develop the market, and even if they could, they do not possess the required capital to cover the underwriting of the market potential – which according to Reuters could be as high as $1.6 billion.

Given this lapse in capacity, it makes sense to at least allow foreign firms to enter into joint venture agreements with the most capable foreign firms. Partnership between domestic and foreign insurance companies will aid Myanmar’s nascent industry through information sharing, technology transfer, strategy development, and educating an entire population on the benefits of purchasing insurance products.