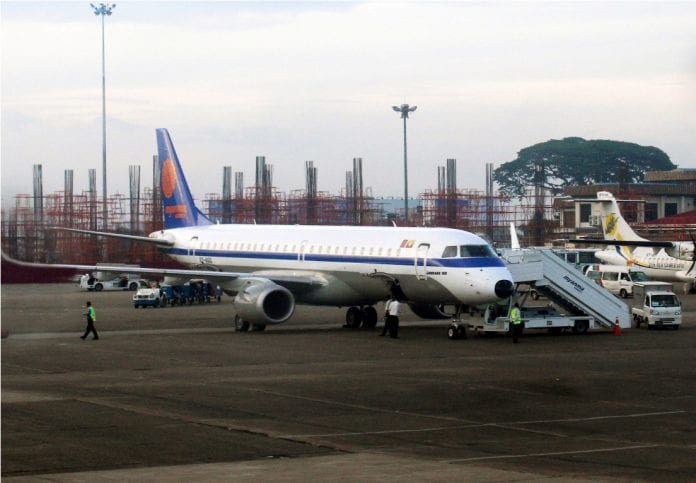 State-controlled Myanma Airways has rebranded itself as Myanmar National Airlines (MNA) in its push to overhaul the struggling carrier and expand its wings internationally.

Despite the rebranding, the national carrier will still be under government ownership, however, it will independently act under a new board of directors on commercial issues to pave the way for badly-needed investment to prop up its antiquated technology and dismal ticketing services.

The corporatisation will help MNA tap Myanmar’s burgeoning aviation sector and compete against a slew of international and local airlines that have swarmed into Myanmar since it started embracing tourists and business travellers in 2011.

U Than Tun, director general of MNA, said the rebranding will allow the company to run differently than before. “In the past, we had to propose through various levels to increase fares. Now the board will act independently to ensure convenience of the public.”

The new board will be able to decide independently on 14 industries approved under the newly legislated National Aviation Law including hospitality, aircraft fuel trading, training and staff capacity development.

“The next phase is to offer shares like other international airlines where shares will be first available to staff and then the public,” he added.

As part of the revamping, MNA has introduced a computerised management system to improve reservation and a new website that allows online booking. Previously buying air tickets from Myanma Airways involved submitting applications and queuing up in person at sales outlets.

MNA also launched a new check-in system at the Yangon International Airport which is planned to be installed in Mandalay, Nyaung Oo and Heho airports in a few weeks.

The airline is carrying out all technical upgrades with the help of Avia Solutions, an aviation consultancy owned by US-based GE Aviation. MNA signed a deal with GE Capital Aviation Services (GECAS) in February to expand its fleet and services by leasing 10 new Boeing 737-800 NG/Max aircrafts. MNA said it will also lease six ATR72-600 planes.

U Than Tun said MNA plans to spend $700-800 million for the overall upgrade and aircraft leasing. Its new planes will replace the current Fokker 27s and 28s, and will be used in for the carrier’s planned international expansion.

International flights to China, Hong Kong, Taiwan and Singapore may start as early as April next year, U Than Tun said.

Myanma Airways was established as Union of Burma Airways in 1948 and was acquired by the government in 1949. It was renamed into Myanma Airways in 1989 and currently operates flights to 26 domestic destinations. It carried 500,000 passengers in 2013 and has exceeded the number by 70,000 so far this year.