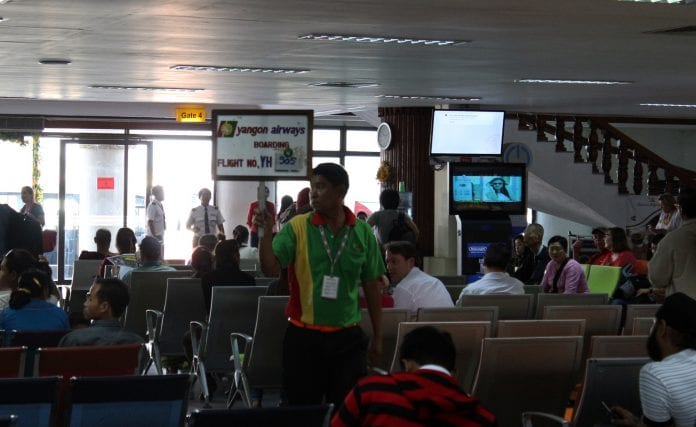 Growing international traffic is driving a rapid expansion of Myanmar’s major airport network as it works to keep up with overseas arrivals.

In February, Myanmar’s Department of Civil Aviation (DCA) announced that work on the new Hanthawaddy International Airport, located 70 kilometres outside of Yangon, would begin next year, with the facility set to be operational by 2020. The first stage of the project, which is to be built and operated by a consortium comprising Japan’s JGC Corp, Singapore’s Changi Airport Planners and Engineers, and Yongnam Holdings, has a budget of K1.52 trillion ($1.5 billion) and will deliver an annual passenger handling capacity of 12 million. The second stage of the development foresees capacity rising to 30 million passengers a year.

However, despite the comprehensive programme to boost international capacity, plans to upgrade and privatise many of the country’s smaller airports have stalled for now as the government focuses on the larger airport projects.

Under a long-term development plan for Myanmar’s aviation sector, Hanthawaddy is to become the main arrivals and departures hub. Yangon International Airport will be developed as a business airport and will see its passenger capacity increased by just over 50 percent to 6 million, following the completion of a new international terminal, the first phase of which is scheduled to be finished by the end of 2015.

Meanwhile, Mandalay Airport, located in the centre of the country, will be developed as a regional and logistics hub, as part of the upgrade programme. Japan’s Mitsubishi and Jalux have come together with Myanmar’s Yoma Strategic Holdings to create a special-purpose vehicle to operate the airport for 30 years. The group will spend $100 million to upgrade the facility with the aim of boosting both passenger and cargo traffic, capitalising on the city’s existing road and river transport networks to facilitate trade links.

Part of the increased call on aviation capacity comes from the domestic market. An expanding economy has resulted in growing demand for air transport, and more domestic links are being added to the existing networks to accommodate this need. However, the main driving force behind the investment programme is the overseas market, thanks to a rising tide of foreign arrivals. Myanmar is expected to host 5 million overseas visitors in 2015, up 40 percent on 2014 and well over double the 2.04 million arrivals the year before.

While many of these visitors will have crossed into Myanmar by land, an increasing number are flying in, stretching existing passenger handling capacity to the limit. Despite only being listed as having the capacity for 2.7 million passengers a year, Yangon International handled 4 million passengers last year, with some other airports also working above capacity.

As the government prioritises the large aviation projects, a programme to improve the network of secondary airports has been put on the backburner for now. The DCA announced in late 2013 that it would privatise at least 30 of Myanmar’s 69 airports. Under the proposed scheme, winning bidders in the tender process would upgrade the airports and invest in expanding their capacity through a build-operate-transfer model.

In October, the DCA called for expressions of interest in the privatisation of 30 airports, with submissions due in early 2015. However, in late December the department’s director general, U Win Swe Tun, told media that the privatisation programme had been delayed until at least the end of this year. He noted that it was necessary to complete the transfer of the three main international airports – Mandalay, Yangon and Hanthawaddy – to the private sector before focusing on the domestic facilities.

Though the decision would delay improvements to domestic aviation services, U Win Swe Tun said the move would allow private bidders more time to prepare their applications.

“We want to encourage the private sector to prepare precise master plans for their proposed airports before submitting the application to us. They still have time. It should include details on how much they can invest and how they plan to operate the airports,” he said.

While the large-scale investment in airport infrastructure is being welcomed, there are other areas of the sector that are in need of development, according to U Si Thu, managing director of Myanmar Airlines International (MAI).

Freighter services, cargo, and in particular maintenance, repair and operations (MRO) are among the areas needing further investment and foreign expertise, U Si Thu told OBG.

“We need foreign expertise and investment in these areas,” he said. “We need investment in infrastructure – new aircraft hangers and other facilities – and more importantly, capacity building to have qualified professionals in aviation.”

Investing in an improved MRO capability would allow Myanmar carriers to have aircraft servicing work carried out locally, reducing their maintenance costs and cutting the time the planes are out of service.

Michael Nesbitt is editorial manager for Myanmar at Oxford Business Group (OBG). The views and opinions expressed here are the author’s own and do not necessarily reflect Myanmar Business Today’s editorial opinion.